Abshiro was born on 19th June 1973 in Kayo, Moyale Constituency,

To be Updated Soon 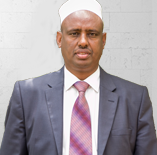