The Judge graduated and obtained a Bachelor of Law LL.B. Upper Second Class Honors degree from University of Daresalam in 1976

Upon his admission as an advocate in 1978, he went into private practice in Mombasa.

Mbogholi Msagha served as member of the Rent Restriction Tribunal and of the Municipality of Mombasa Valuation Court.

Mbogholi Msagha was appointed Judge of the High Court in 1987 at a young age of 34 years old.

He is currently the presiding judge in the Land and Environmental Law division and the chairman of the board of trustees of The Judicial Service Staff Pension Scheme.

On October 3, 2010, Justice Msagha Mbogholi  was elected by the judges of the High Court to the position of principal judge to head the High Court. 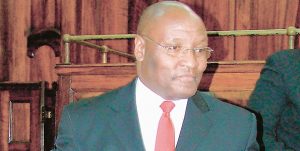 Outside of his judicial work, Justice Mbogholi Msagha chaired the Commission of Inquiry into the Mtongwe Ferry disaster in 1994. This was Kenya’s largest marine accident in which 257 passengers aboard the MV Mtongwe drowned after it had capsized.

However, Justice Msagha’s career as a judge suffered a body blow when he was named in the list of judges and magistrates that, in the view of the Ringera committee, had been involved in corruption and who would be required to resign as part of the purge on the Judiciary that was instituted by the Narc government.

In December 2000, Justice Msagha presided over a bench of the High Court in the Gachiengo case, which led to the disbandment of the Kenya Anti-Corruption Authority (KACA). The other judges on the bench were Kassanga Mulwa and J K Mitey.

In 1997 Justice Mbogholi Msagha presided over the case of the application by Mr Mwai Kibaki who had challenged the election of then president Moi in 1997, to call Mr Moi to be examined as a witness regarding the service of the election petition papers. The court declined the request to call Mr Moi for cross-examination, saying that no proper basis had been made for the application.

Another case was the decision, in the late 1980s, by Kenya Airways, at the time running massive financial losses, to cut down its costs by reducing staff led to one of the biggest cases on the rights of workers. Justice Mbogholi Msagha decided the case in the High Court.

At the time, Kenya Airways had 4,000 employees, and its losses were attributable to the large wage bill. A decision was made to lay off 1,800 workers by 1990, as part of the austerity measures to bring the airline to profitability.

More than 900 of these workers filed suit in the High Court, challenging the decision to declare them redundant. Their challenge was that the redundancy had been done outside of the law governing employment. They sought more than Ksh. 2.5 billion as compensation for loss of service, severance pay, and pay in lieu of notice.

After a long trial, characterised by procedural bottlenecks, the suit was heard by Justice Msagha, who found in his judgment that the “redundancy was not only misplaced but illegal”.

Justice Mbogholi Msagha is being touted as a front runner in the succession battle for the post of Chief justice of th Kenya Supreme court.

He has a good history of judicial judgements whose experience will come in handy in the challenging corridors of Kenya’s highest court.

Justice Mbogholi Msagha has made few decisions with which there would be much controversy. This may be regarded as a double-edged sword, on the one hand portraying the judge as having made a career of avoiding making difficult decisions, and, on the other, as having made correct decisions all his judicial life.