Uhuru Kenyatta full name is Uhuru Muigai Kenyatta. He was born on 26 October 1961. He is currently the 4th President of Kenya. He was sworn in to office on 9th April, 2013.

Uhuru Kenyatta is the son of Mzee Jomo Kenyatta who was the first president and founding father of Kenya, and his fourth wife Mama Ngina Kenyatta.

Uhuru Muigai Kenyatta attended his foundation classes of kindergarten and Standards One and Two, at Loreto Convent, Valley Road in Nairobi from 1965 to 1968.

Between 1969 and 1980 Uhuru Kenyatta attended St Mary’s School in Nairobi where he graduated with his London GCE A-Levels in 1979.

Uhuru Kenyatta enrolled to study economics, political science and government at the Amherst College in the United States. He graduated in 1985.

Between 1979 and 1980, Uhuru Kenyatta briefly worked as a teller at the Kenya Commercial Bank Kipande House Branch just opposite the GPO along Kenyatta Avenue Nairobi.

Upon his graduation in 1985, Uhuru Kenyatta returned to Kenya, and started a company Wilham Kenya Limited, through which he sourced and exported agricultural produce. Uhuru says he started the company from a small pickup with which he used to sell French Beans. He would collect them from farmers all the way from Meru, package them and finally export them.

He owned the company for ten years but later sold it at a profit. This was around 1996 – 1997 when he began his political journey.

In 1996 President Moi Began his preparations to groom Uhuru Kenyatta for bigger things in life. President Moi first made sure Uhuru was chosen as the KANU Chairman of Gatundu Branch.

In 1997, Uhuru contested the Gatundu South Parliamentary Seat under KANU ticket but lost to a Nairobi Architect called Moses Mwihia. His loss was attributed to the KANU apathy prevailing in the Central province at that time.

Knowing very well that he was on his second and last term of his presidency, President Moi had to rush against time to Groom Uhuru before 2002 General elections.

In 1999 Moi appointed Uhuru to chair the Kenya Tourism Board, a government parastatal. Two years after, he was nominated to parliament in 2001, and subsequently appointed to the cabinet as Minister for Local Government.

Following this, he was elected as the First Vice Chairman of KANU still in 2001. These quick successive elevations of Uhuru Kenyatta raised eyebrows among the current KANU stalwarts like Musalia Mudavadi, Kalonzo Musyoka, George Saitoti and newly recruited Raila Odinga.

After the general elections Uhuru Kenyatta garnered 31% of the vote and came second to Mwai Kibaki. He took up the role of the leader of Official Opposition in Kenya in 2003.

On 15 December 2010 Uhuru Kenyatta was named as a suspect of crimes against humanity by the International Criminal Court prosecutor Luis Moreno Ocampo, for planning and funding violence in Naivasha and Nakuru.

In January 2012, Uhuru Kenyatta resigned from his Cabinet post after the ICC confirmed the cases against him.

On 20 May 2012, Uhuru Kenyatta launched The National Alliance party – TNA in a modern high-tech dome at the Kenyatta International Conference Centre. His presence at the TNA launch was a strong indication that he would contest for the party’s presidential nomination ticket in his quest for Kenya’s Presidency in the 2013 General Elections.

In 2013, Uhuru formed a coalition with William Ruto’s URP and other small parties to form the Jubilee Alliance Party which propelled him to win the 2013 presidential elections.

On 9th April, 2013 Uhuru Kenyatta wad sworn in as the Fourth President of the Republic of Kenya. 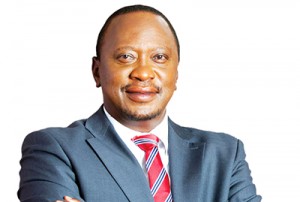 After the 2007-2008 post election violence a commission of inquiry was formed to investigate the cause. This commission was headed by Justice Philip Waki. The Commission is famously known as the Waki Commission.

The Waki Commission Came up with findings which it gave to Kofi Annan. Kofi Annan gave the report to the ICC Chief Prosecutor Luis Moreno Ocampo.

On 15 December 2010, Luis Moreno Ocampo came up with a list of six individuals who he said bore the greatest responsibility for the planning and executing the 2007-2008 post election violence in Kenya. These six individuals were referred to as The Ocampo six.

Uhuru maintained his innocence and wanted his name cleared. On 8 March 2011, he was indicted after being summoned to appear before the ICC pre-trial chamber. He was to appear at The Hague on 8 April 2011 alongside the 5 other suspects.

On 29 September 2011, while seeking to exonerate himself, Uhuru Kenyatta put up a spirited fight as he was being cross-examined by ICC Chief prosecutor Luis Moreno Ocampo in the Hague, denying any links with the outlawed Mungiki sect.

Uhuru Kenyatta said Raila Odinga should take political responsibility for the acts of violence and killings that followed the 2007 presidential elections in Kenya.

He told the three judges that “by telling his supporters election results were being rigged, fanned tensions and then failed to use his influence to quell the violence that followed the announcement of the 2007 presidential results.”

On 23 January 2012, the ICC confirmed the cases against Uhuru Kenyatta. There are also serious concerns about witness tampering and indeed, a number of witnesses have disappeared or died.

On 31 October 2013, the ICC postponed Uhuru Kenyatta’s trial for crimes against humanity by three months until 5 February 2014 after the defense had requested more time.

On 8 October 2014, Kenyatta appeared before the ICC in The Hague,making history as the first sitting head of state to come before the ICC. He was called to appear at the ICC “status conference” when the prosecution said evidence needed to go ahead with a trial was being withheld.

In a speech to the Kenyan parliament Kenyatta said that he was going to The Hague in a personal capacity and not as president of the country, so as not to compromise the sovereignty of Kenyans. President Uhuru Kenyatta relinguished his presidential powers for two days to his deputy William Ruto so that he would remain like a normal citizen when going to the Hague.

Uhuru Kenyatta did not speak in court, but denied the charges in comments to journalists as he left the court to catch a flight back home. “We as Kenyans, we know where we came from, we know where we are going, and nobody will tell us what to do,” he said.

On 5 December 2014, prosecutors at the ICC withdrew the charges against Uhuru Kenyatta. The prosecutor’s office said that the Kenyan government had refused to hand over evidence vital to the case.

On the advent of President Kibaki’s departure, it became apparent that his lieutenants favoured Musalia Mudavadi as his successor. After realizing this Uhuru Kenyatta had to find a vehicle for his presidential bid.

On 20 May 2012, Uhuru Kenyatta launched The National Alliance party at the Kenyatta International Conference Centre.

The first term of President Uhuru Kenyatta was characterized by many ups and Downs.

In 2013, foreign democracies warned Kenya against electing Uhuru Kenyatta because he had been indicted by the ICC.  They said that ‘Choices have consequences’. Britain categorically said that they will only maintain essential contacts with Kenya.

This statements formed the earlier approach of “Facing East” as opposed to the west. Uhuru Kenyatta began a charm offensive of signing contracts with Eastern Countries such as China. It is said that it is in this period that Uhuru Replaced the Britain made Presidential Land Rover with a Japanese Toyota Land Cruiser.

His activities have however been more robust at the Africa level where he has pushed more intra-Africa trade and economic independence of African nations.

The Assembly of State Parties of the ICC would two days later amend the ICC statute to allow for one to appear by video link, a proposal President Kenyatta had made when he was Deputy Prime Minister.

President Kenyatta has led and negotiated peace agreements in South Sudan and in the Democratic Republic of Congo.

At the East African level, Uhuru Kenyatta has developed a close relationship with the Ugandan President Yoweri Museveni and Rwanda President Paul Kagame, creating the Coalition of the Willing, a caucus within the EAC that has signed on to more joint development and economic agreements than the other EAC partners, including a joint tourist visa.

It had been perceived that his administration’s relations with Botswana were strained due to Botswana’s support of the ICC process. He has since visited Botswana to remove this perception and Botswana voted in favour of the AU’s ICC Resolution.

As expected, he has remained close to China which is funding most of his infrastructural projects. 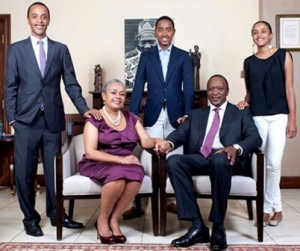 Uhuru married his sweetheart Margaret Wanjiru Gakuo in 1989. She was born on April 08, 1964. In 2014, she was named the UN Person of the Year. Since her husband became president, she has been campaigning to lower child maternal mortality rates.

Kristina Wambui was born in 1952 and is married to Victor Pratt.

Uhuru’s video of his life