Irungu Kang’ata was born in 1980 in Muranga town. He is The Muranga County Senator having been elected to the Kenya Senate on 8th August 2017 on a Jubilee Party ticket. He is also the Majority Chief Whip for the Jubilee party in the Kenya Senate after taking over from Nakuru County Senator Susan Kihika. This happened in May 2020 after the reorganisation of the Senate leadership by President Uhuru Kenyatta

He attended Muranga Township Primary School now called Vidhu Ramji Primary School between 1986 and 1993. He went to Thika High School between 1994 and 1997. He joined The University of Nairobi Parklands Campus in 1999 and was elected vice-Chair of Kenya Law Student Society while still a freshman and later elected as vice-chairman of SONU the same year.

He was suspended from campus for championing against discrimination of regular JAB students who could not do certain courses that were reserved for parallel module 2 students.

In 2002 while still in suspension, he was elected as a Councillor for Central Ward in Muranga town. He was a University student and also a Councillor.

In 2004 he completed his Law Degree and joined the Kenya School of Law for his Diploma in law.

He has also done CPS section 1 and Section 2 and finally Masters of Law from the University of Nairobi. 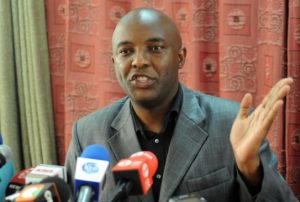 As indicated above Irungu Kangata started his political career while still in the University of Nairobi. He even became a Councillor of Central Ward in Muranga town in 2002 while he was still a student.

In the 11th parliament, Irungu Kangata was awarded by Mzalendo Trust for championing Education related legislation in parliament after his higher Education amendment bill that was signed into law by the president.

In 2015, Irungu Kangata was awarded for best management of Constituency Development Fund (CDF) and investing heavily in domestic water projects.

The MP was awarded by Central Kenya Forum for Peace at White Rhino Hotel in Nyeri town after his CDF kitty management was recognized as the best within Mount Kenya region.

According to a report from the Forum, Irungu Kangata has invested more than KES 42 million in the water sector by increasing connection to public schools which the community has tapped to their homesteads.

Irungu Kangata is a strong crusader against gay rights in Kenya. In March 2014, he proposed that parliament seek information about alleged non-enforcement of anti-gay laws in Kenya by various organs of the National Government.

He called on the police to arrest those practising homosexuality and, if they fail to do so, citizens will be called to do it themselves.

He reportedly has formed an anti-homosexuality caucus in parliament to push for further legislation against LGBT people in Kenya.

Under existing Kenyan law, sexual activity “against the order of nature” is punishable by up to 14 years in prison, but arrests are rare.

In July 2015, Irungu Kangata warned US President Barack Obama against bringing the homosexuality crusade to Kenya and Africa in general.

Kiharu MP, Irungu Kangata is one of those people who clearly fits this description. Even though he earns almost KSH 1,000,000 per month, he is not extravagant he invests in projects and gives most of it away. His mode of dressing is also surprising.

Unlike his colleagues, expensive suits, electronic devices and cars are not a priority. He still drives an old battered Toyota Corolla and the most expensive piece of technology he’s ever owned is his phone which is worth around Ksh.10,000.

He’s simplistic lifestyle once got him ejected from the canteen reserved for MPs. The guards there thought he was a driver and was forced to produce some form of identification to prove he was in fact an MP.

He’s also gained a good following due to the massively successful water projects he introduced in his constituency.

For those who may not know this, Mr Irungu Kangata first burst into the public limelight after represented a guard, Rebecca Kerubo against then Deputy CJ Nancy Baraza. Ms Baraza had been accused of pinching Kerubo’s nose at the village market when she insisted on searching her. After he won the case Ms Baraza was forced to step down.

Irungu Kangata also came to the rescue of Martha JM Miano, who was charged with misuse of telecommunication gadget then held without bail or bond for seven days. Her arrest and arraignment caused alarm amongst Nyeri county residents as news of Ms Miano’s case spread through social media sites.

However barely 24 hours later Lawyer and Kiharu MP Irungu Kangata showed up at the Nyeri court and said he would defend Martha JM Miano.

Irungu Kangata claimed that Ms Miano’s arrest was politically motivated by Nyeri Governor Nderitu Gachagua and demanded that she be granted bail. She was granted bail and released. The controversy surrounding her was being fueled by the fact that Ms Miano was alleged to be an employee of the Mathira Constituency Development fund, which is under Mathira MP Peter Weru.

Irungu Kangata also lives in a modest house in Murang’a town. At his home, there are no servants, no security detail and no fence. His houses are largely made of old iron sheets.

The floor is not cemented. There is no flowing water, no sink for washing utensils and no washrooms inside the house. The MP’s family compound has no fence.

Irungu Kangata is a first time MP for Kiharu, a constituency represented by wealthy billionaires and well-known politicians like Dr Gikonyo Kiano, Ngenye Kariuki and Kenneth Matiba in the past.

His most priced earthly possession is a three-bedroom house in Kikuyu and he is building a house in Murang’a town for his parents so that they can also have the comfort of living in a house made up of brick and mortar.

He also owns a law firm in Nairobi and Muranga. Muchoki, Kang’ata, Njenga & Company Advocates (“MKN & Company”) was founded in 2007 by Moses Muchoki, Irungu Kangata and Charles Njenga but became fully operational in 2009.