Kenneth Marende full name is Kenneth Otiato Marende. He was born on 7th January 1956 in Mumboha village, Ebusikhale sub-location, Bunyore in Vihiga County. He was the Speaker of the National Assembly of Kenya’s 10th Parliament having been elected Speaker on January 15, 2008.

He is currently the Chairman of the Board of Directors of The Kenya Power and Lighting Company Limited.

Kenneth Marende joined Ebusakami Primary School until 1969 when he completed his primary education. He Joined Kakamega High School and sat for his East African Certificate of Education – EACE in 1972.

In 1974 he sat for his EAACE – East African Advanced Certificate of Education in Kagumo High School where he had been admitted for his A-Levels.

In 1975 he was admitted to University of Nairobi Degree course in Law. After leaving UON in 1978 he enrolled for Post Graduate Diploma Course at the Kenya School of Law. 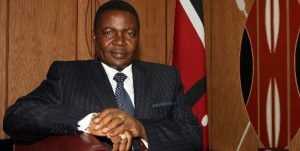 He started working as a State Counsel in September 1979 and rose through the ranks to the level of Senior State Counsel. He left the Government service in 1984 to work with Bryson Inamdar and Bowyer Company Advocates where he was admitted into partnership in 1986 until 1988 when he joined Warender and Company Advocates.

In 2012 Marende & Nyaundi Associates – MANCO was founded by partners Kenneth Otiato Marende and Dr. Ken Nyaundi. The firm is strategically located in the ACK Garden Annex along first Ngong Avenue.

On 5th January, 2015, after missing all political positions, Former speaker of the National Assembly, Mr. Kenneth Marende, was appointed the Chairman of the Board of Directors of The Kenya Power and Lighting Company Limited. He is the twenty-fifth Chairman of the Board in the Company’s 94-year history. He succeeds Mr. Eliazar Ochola who served a four-year term as Chairman.

In 2002, Kenneth Marende actively joined politics upon his election by the constituents of Emuhaya Constituency on a NARC Party ticket and represented them in Parliament until 2008. The Former MP from 1997 – 2002 was Sheldon Muchilwa.

In 2008, he was elected the Speaker of the 10th Parliament of Kenya and had to step down as the MP of Emuhaya occasioning a by-election. He was succeeded by Wilber Otichilo.

Kenneth Marende predecessor as speaker was Francis ole Kaparo and he was succeeded by Justin Muturi in 2013.

As Speaker of the National Assembly, Kenneth Otiato Marende chaired the House Business Committee, the Parliamentary Service Commission, and sat in the Standing Order, Powers and Privileges, and Pensions Committees. He was also responsible for initiating live broadcasts of the Parliamentary proceedings in the House.

His accolades and accomplishments as the man in-charge of Kenya’s legislature resulted in his appointment abroad as President of the Commonwealth Parliamentary Association.

In 2008, he was awarded the highest award any Kenyan citizen can receive, the Elder of the Golden Heart (EGH) by the President, the next year he was awarded the Jurist of the Year by the International Commission of Jurists (ICJ-K). In 2011, the Law Society of Kenya (LSK) feted Kenneth Marende with the highest award any Advocate can receive, the Advocates Lifetime Roll of Honour.

Otiato Marende is being touted as the Successor of the Current Chief Justice Willy Mutunga after his early retirement in June 20, 2016.

Marende’s first wife was Dr Lavender Marende. She died in April, 2005 but they had separated before then.

The second wife was Rachel Olubero, a reproductive health consultant 30 years younger than him, who comes from Ebusakami in Maseno. They got married in 2002 under the Bunyore customary law. They separated in 2008, five months after Kenneth Otiato Marende Became Speaker of Parliament.

The third controversial wife was a Rongai woman called Jennifer Nkowua. No records of any marriage but they have a daughter whom Kenneth Otiato Marende had enrolled in Rusinga School but failed to pay school fees and other family needs for her. He had also moved the woman from Rongai to a four-bedroomed house in Lavington.

The child’s birth certificate indicates she was born on october 19, 2003 at Nairobi Hospital. Her father’s name is entered as Kenneth Otiato Marende.

In 2014, Jennifer took Marende to court and the judge issued an order requiring Mr Marende to pay school fees for the minor and cater for other related expenses among them a medical insurance cover for the child and rent for the house where the child lives with the mother Jenifer Nkowua.

Marende’s fortunes seems to be dwindling resulting to his failure to take care of his children to the extent of being taken to court.

However, he is a senior partner in Marende & Nyaundi Associates – MANCO which should be giving him some revenue plus his salary as the Chairman of the Board of Directors of The Kenya Power and Lighting Company.