He beat his closest rival Samwel Mbae Ragwa of Narc Kenya to emerge the winner in the 8th August 2017 general elections. He was elected to the 11th Parliament on an Alliance Party of Kenya (APK) party (Jubilee Coalition) in 2013.

In the National Assembly he is a member of Public Investments Committee and also a member of Departmental Committee on Energy, Communications and Information from March 2013.

Onesmus Muthomi Njuki has spoken 405 times in Parliament from March 2013 till may 2016.

In his constituency Muthomi Njuki is referred to as Muthomi wa Generations from his vast business in the Safaricom Airtime and Phones dealership and Mpesa agents spread all over Kenya. His Safaricom Dealership company is Generations Electronics & Allied LTD. 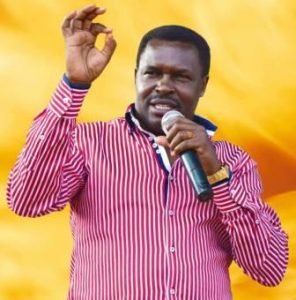 The elders performed the ritual locally referred to as gwikia nduuka, citing that the witches were trying to scare Form One students from receiving metal boxes that had been promised to them by Chuka/Igambang’ombe MP Muthomi Njuki.

The bedeviled boxes, which contained goat heads and horns, were dumped at Marimanti, Gituri, Rwatha and Mukothima Primary Schools last month, just a week before the MP embarked on distributing the boxes to the students.

The elders claimed they had issued an ultimatum to those behind the bizarre act to apologise, but they failed to meet the deadline hence prompting them to make them ‘pay for their sins’.

In their act, the 60 village men declared that those responsible would face bad omens such as accidents, deaths or even madness.

During the ritual, the elders prayed in their birthday suit while facing Mount Kenya, burnt sodom apples and threw dry branches as a way of cursing the offenders.

In April 2016, a bill was introduced to the National Assembly by Muthomi Njuki that will enable the public to view the remains of Kenya’s founding father the late Jomo Kenyatta if Parliament passes the Bill. The bill is seeking to make the Jomo Kenyatta mausoleum a tourist site.

The Kenyatta Mausoleum Bill, 2016, provides a framework for the public to access the grounds where Mzee Kenyatta’s remains were buried and for management of the tomb as a tourist attraction site.

The late President Kenyatta died on August 22, 1978 and was laid to rest at the now military guarded mausoleum next to the Parliament buildings on August 31, 1978.

However, members of the public are not allowed to access the premises. Each year on August 22, to mark the anniversary of Kenyatta’s passing, the sitting President and members of the Kenyatta family visit the mausoleum to lay wreaths at the headstone in memory of the founding father, in what is always a military ceremony with no public fanfare.

If the Bill is passed by the the Assembly and gets presidential ascent into law, the grounds will be managed by National Museums Board.

If passed by the House, both local and international tourists will access the tomb at a fee.

In May 2013, Muthomi Njuki has disassociated himself from demands by his fellow MPs for a salary increment. Njuki instead asked Kenyans to maintain the attitude they have held towards the MPs who want their perks raised.

“Some of the MPs entered the house earning Sh50,000 and they got Sh500,000 which is quite big for them and they are contented with it. Some of us didn’t join parliament so as just to earn money, we have worked for many years without pay serving the people,” said Muthomi Njuki.

The MP stressed on the need for servant leadership and vowed to serve the country irrespective of the salary that they get.

In January, 2016 Senate Majority Leader Kithure Kindiki and Tharaka Nithi Governor Samuel Ragwa clashed over contenders for the gubernatorial seat in the 2017 elections.

Governor Ragwa took issue with Prof Kindiki’s move to endorse Chuka Igamba-Ng’ombe MP Muthomi Njuki for the seat during an event to launch construction of a road in the county.

Mr Ragwa’s supporters barred Mr Muthomi Njuki from addressing the public and the meeting was hurriedly ended before all the leaders spoke for security reasons.

The leaders met during the launch of the tarmacking of Chogoria-Giancuku in Maara constituency.

During a requiem mass for James Ngungi in Itugururu, Muthomi Njuki criticised Petkay Miriti’s bid for Tharaka Nithi governor next year. Miriti was defeated in the 2013 election by Governor Samuel Ragwa.

Muthomi Njuki compared Petkay Miriti to a he-goat that is “always making noise during mating season but is not up to the task”.

He said some politicians keep asking for seats all the time and should back down next year as “I will trounce them” in the race for governor in 2017. Both Muthomi Njuki and Petkay Miriti and from Chuka-Igambang’ombe constituency.