Duale’s full name is Aden Bare Duale. He was born in 1969 in Balambala in Garissa County. He has a twin brother.

He comes from the Abdulwak of the Talamooge sub-clan, which is part of the larger Ogaden clan.

Until June 2020, he was the Majority Leader in the Kenya National Assembly.

He is the Garissa Township Constituency MP on a URP ticket.

He holds a Bachelor of Education Degree from Moi University and an Executive MBA from Jomo Kenyatta University of Agriculture and Technology. 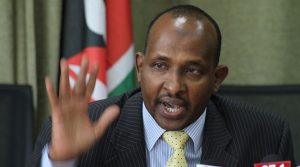 Hon. Duale started his career as a graduate teacher at Sankuri Secondary School in 1992. His teaching career did not last two terms.

After quitting, he worked as a clerical officer at the Garissa Provincial Commissioner’s office for only six months before he decided the pay was too low.

From there he joined family business because, according to him, that is where money was.

He later joined Kenya Broadcasting Corporation in 1999 as a Director and served up to 2003.

Duale is an accomplished businessman and strategist and to this end he has served in several organisational boards and advisory committees. He was a founder member and CEO of the Livestock Marketing Society of Kenya.

Duale was elected to parliament in 2007 to represent the people of Dujis Constituency. He vied and won on an ODM ticket.

He did this behind the wishes of former Chief of General Staff Mohamud Mohamed who was the perceived king maker in the North Eastern Province and also doubled as his father-in-law.

In April 2008, he was appointed as an Assistant Minister for Livestock. He has served in other crucial roles and especially in the new constitution where he served as the North Eastern Province ‘YES’ Team Leader.

He was also the ODM National Vice Chairman in Political Affairs until 2011 when he differed in policy matters with his
party leadership.

Hon. Aden Duale has proclaimed that he is William Ruto’s political student. He is a die-hard supporter of William Ruto and President Uhuru Kenyatta. He has said on several occasions that he can take a bullet for the President and his Deputy.

In 2011, he parted ways with ODM leadership and followed Ruto to form the United republican Party – URP. URP joined hands with President Uhuru Kenyatta’s TNA to form the Jubilee Coalition which successfully won the 2013 General Elections.

Due to his high bargaining power and being very vocal he was elected the Majority leader of the Kenya National Assembly.

Duale’s late father was a pastoralist. He did not believe in education. Duale’s mother Hawa Kosar, a small-scale businesswoman, moved the family to town and left the father to herd cattle back home.

Aden Duale is Married to one wife who he lives with in Nairobi. She is the daughter of former Chief of General Staff Mohamud Mohamed.

Aden Duale has five sons. His eldest son Abdul Razak Aden has scored a mean grade of A- (minus) in the 2015 KCSE. He was a student of Mang’u High School.