Thursday, 29th November, 2018: City Hall announced that no public service vehicle (PSV) will be allowed into the Nairobi Central Business District (CBD) to pickup or drop off passengers, saying that it was commencing the operationalisation of a gazette notice of May 12, 2017 that designated specific termini and routes for PSVs operating through city centre.

Acting County Secretary Pauline Kahiga stated that the county government had revoked all previous gazette notices allocating any other place as picking and dropping areas within the CBD.

“The operators are required to take note that the above changes take effect as from December 3, 2018,” read the notice from Ms Kahiga.

Many Kenyans in their personal capacity know why matatus have been banned from accessing the Nairobi CBD. Our matatus around the country have been vilified for their lawlessness and lack of respect for human rights and traffic rules. Since the calmness, serenity and tranquility of the Nairobi CBD business environment should be preserved, Matatus have to be banned from Nairobi CBD.

Owing to their large number which is still rapidly growing, the matatus scramble for the limited parking space within the CBD and this situation makes most of them to park in the middle of the road thereby causing obstruction and eventually unnecessary traffic jams. This makes it impossible to still allow all of them to access the Nairobi CBD.

Why matatus have failed to regulate themselves as expected

According to the Matatu Sacco Regulations, the sacco is supposed to manage most of the aspects of a matatu operating under them. But as it is already evident, the management of matatus is done by matatu owners and not the sacco. The sacco only manages the route. This state of affair has come into being because the sacco and the matatu owners have been held captive by the rogue matatu crew and cartels.

This can be well understood when we look into details about what caused the sudden death of the much hyped introduction of digital payment methods like the 1963 card by Safaricom.

The matatu industry is a very lucrative sector! Very very profitable! This is the major conduit that the police use to self enrich themselves overnight. So the police force is another party that would never want to see a self regulated matatu industry.

How the matatu sector in Kenya should be managed

How to tame the matatu sector is best explained HERE

First and foremost the current matatu ban as imposed by the Nairobi City County Governor will not work if the matatu management is left as it is. It will be very hard for the County Government to manage the matatu cartels. The matatu sector should be reformed first using this method as explained in this artcle. How to tame the rogue Matatu Industry in Kenya and create millions of Jobs

After the above has been achieved then we can very easily operationalise the Gazette Notice no. 4479 of 12th May, 2017 as illustrated below. 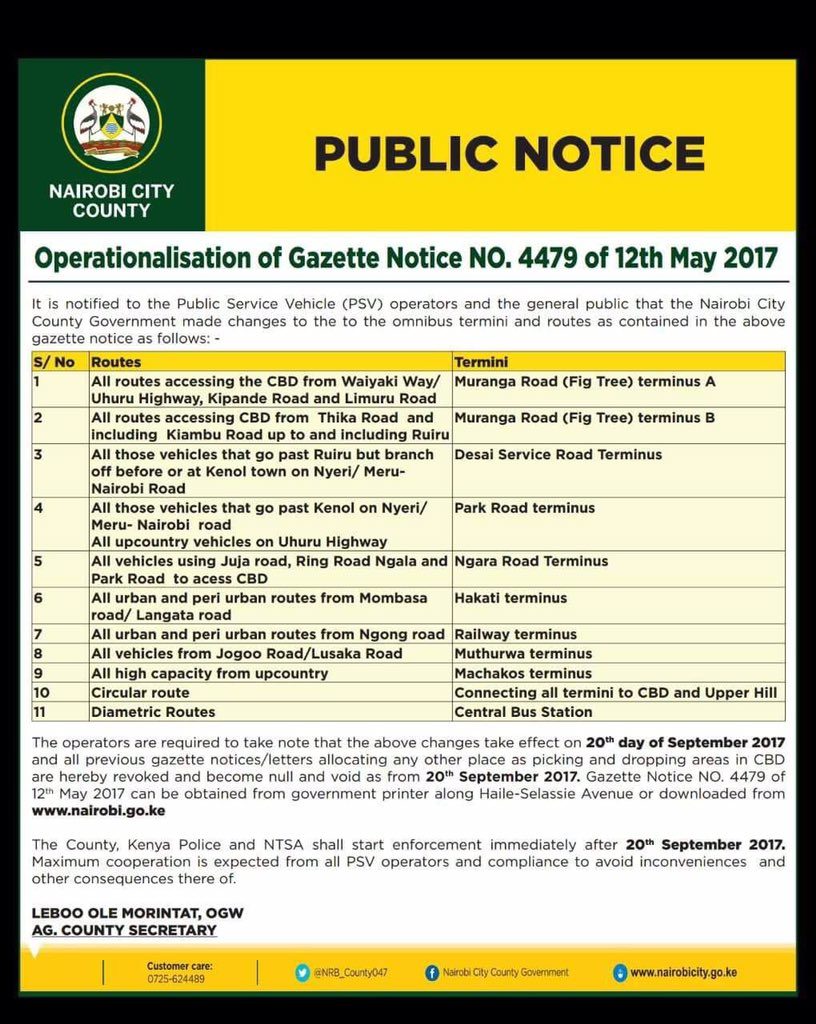 This plan by the Nairobi City County Government is very good. One thing that caught my attention is Point no. 10 in the gazette notice that stated that there will be a circular route connecting all termini to the CBD and Upper Hill.

Ultimately Nairobi needs these Bus termini for the main purpose of

Traffic terminating to all other termini in Nairobi is OK, but the elephant in the room is how to manage this circular route. If this circular route is managed well then we as Nairobians will be home and dry because the inter-connectivity between one termini to another and also access to the CBD from each termini was what the passengers were worried about.

For this to work, it is with the assumption that the Matatu Saccos have taken over the entire management of the matatus from ownership to employment of workforce.

Now how will this help? This is it, no matatu sacco can lay claim to the entire CBD route. The CBD belongs to all of them. So all these matatu saccos will form separate company which will have buy separate buses to operate within this circular route. The shareholding may be be equivalent to the number of active buses operating in each sacco. This is because some routes have fewer passengers than others.

These buses will be labeled depending on where they are are taking the passengers. For example We can have buses labeled Central Bus Station meaning if you see this bus in any termini or anywhere else, just know its destination is Central Bus Station. If you see a bus labeled Muthurwa Bus termini then know it will take you to Muthurwa, and so on and so forth.

These buses should have special spots in all the termini such that no passenger is disoriented in any way when going to the next destination.

When this arrangement is reinforced with the dedicated bus transit lanes within the Nairobi CBD then the matatu nightmare we live with now will be a thing of the past. God Bless Kenya