Kalpana Rawal was born on 15 January 1946, in Bhuj city in Kutch district in the state of Gujarat, India. Rawal moved from India to Kenya in 1973.

Rawal holds a Bachelor of Arts degree, and Bachelors and Master of Laws in constitutional and administrative law.

She received her LLB and LLM degrees in India, where she practised for three years under the tutelage of Prafullachandra Natwarlal Bhagwati who later became the 17th Chief Justice of India. 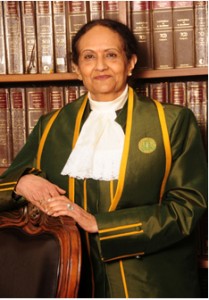 In 1975 Kalpana Hasmukhrai Rawal worked as a teacher of both administration and regular police officers at Lower Kabete.

In the same year, she set up a private practice becoming the first woman lawyer to do so in Kenya. She run a general practice until 1999 when she was appointed a commissioner of assize, and judge of the High Court thereafter.

Justice Rawal joined the judicial service as a High Court judge in 2000. Until her appointment as the Deputy Chief Justice, Rawal was judge of the Court of Appeal.

She was appointed as the Liaison Judge for Kenya making her a member of the International Hague Network of Judges
in 2010. She assisted the International Criminal Court (ICC) in taking evidence of security officers in the investigation into Post Election Violence of 2007-2008.

She was Chair the Commission of Enquiry into the causes and circumstances surrounding and leading to Police Helicopter crash in June 2012 in Kibiko, Ngong Forest in which six people were killed including Internal Security Minister, Professor George Saitoti and his Assistant Minister, Orwa Ojode.

She earned the Elder of the Order of Burning Spear (EBS) in December, 2012.

In September 2012, the Kenya Judges and Magistrates Vetting Board in its fourth Determination declared Rawal fit for office. It had earlier delayed its decision as she was among judges hearing a national interest case to determine on the date of the next Kenyan general elections.

The JSC however re-advertised because it was dissatisfied by the number of applicants. The position subsequently attracted applications from 17 women and one man. She was among 5 shortlisted for the position.

On 22 February 2013, the JSC announced that after completing the interviews it had nominated Court of Appeal Judge Kalpana Hasmukhrai Rawal. She was successfully vetted by Parliament, and then appointed by the President as the Deputy Chief Justice.

She took Oath of Office as the Deputy Chief Justice before President Uhuru Kenyatta and Chief Justice Dr Willy Mutunga on June 3, 2013.

Since Kalpana Rawal was born on 15 January 1946, as at January 2016 she clocked the mandatory 70 years retirement age for judges and magistrates. She is therefore now fighting a legal battle to remain on that seat for 4 more years as would have been the case if the 2010 constitution was not promulgated.

Kalpana Rawal’s family lives in the UK mostly her sons both of whom are British subjects.

Her father UJ bBhatt had served as a judge in the Gujarat High Court and while her grandfather Jaduram Bhatt was Deputy Law Minister in the District of Kutch, Gujarat, India.

Kalpana Rawal has two adult sons who live and work in the UK.

There were companies that were registered in the UK to deal with real estate business. She resigned from those companies in 2007.

These are Kalpana Rawal’s Companies she had registered

Kalpana Rawal’s assets declared to the JSC in 2015 were

After the a huge leaked set of 11.5 million confidential documents that provide detailed information on more than 214,000 offshore companies listed by the Panamanian corporate service provider Mossack Fonsec.

According to the documents date to September 7, 2007, Kalpana and her husband indicated that they set up an offshore holding company to move his business to the British Virgin Islands.

She was a director in these companies but by 2007 she had resigned from all of them. The companies were