Justice Okwengu full name is Hon. Lady Justice Hannah Magondi Okwengu. She is currently a judge of the Court of appeal in Nairobi

Justice Hannah Okwengu graduated with a Bachelors Law degree in 1979 from the University of Nairobi.

Lady Justice Okwengu has attended various local and international courses, conferences and training workshops. Such include 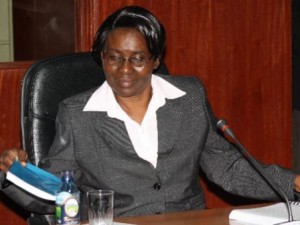 Lady Justice Hannah Okwengu first worked as a Land Registrar in Mombasa, before moving to the Municipal Council of Mombasa where she worked as an Advocate for 3 years.

Lady Justice Okwengu then joined the Firm of S.K. Mwangi & Co. Advocates where she worked for about a year before moving to the Judiciary as an Ag. Resident Magistrate in October, 1983.

Between 1983 and 1999 Lady Justice Okwengu rose through the ranks to the position of Chief Magistrate.

In 1999, Hon. Lady Justice Hannah Okwengu was appointed by his Excellency the President of Kenya as Assistant Director Kenya Anti-Corruption Authority (KACA) for a five year term. She set up the Prosecutions Department of the Authority and commenced active prosecution of corruption cases. Her appointment ended prematurely in October, 2001 after KACA was disbanded following a High Court decision declaring KACA unconstitutional.

Hon. Lady Justice Okwengu returned back to the Judiciary and was posted to Mombasa as Chief Magistrate, a position she held until May, 2003 when she was appointed a Judge of the High Court and posted to Nyeri High Court.

Apart from Nyeri High Court Hon. Lady Justice Okwengu has worked in Milimani Commercial Court and is currently based at the High Court in Nairobi.

In addition to her judicial functions, Hon. Lady Justice Hannah Okwengu has also been engaged in special assignments. From 1993 to 1999 she was the Executive Secretary of the Auctioneers Licensing Board.

She was also Secretary to the Task Force that was appointed by Hon. Attorney General to look into the Laws relating to Auctioneering.

In 1999 Judge Hannah Okwengu was a member of the Committee implementing the recommendations of the Kwach Committee.

In 2003 to 2004, she was a member of a Constitutional Tribunal appointed by His Excellency the President to investigate the conduct of a High Court Judge.

Judge Okwengu is currently a member of the Judiciary ICT Committee appointed by Hon. The Chief Justice to spearhead reform initiatives in the use of modern technology in the Judiciary.

Hon. Lady Justice Hannah Okwengu has also been involved in welfare activities within the Judiciary. Between 1990 and 1995 she was the Vice Chairperson of Sheria Sacco Society and also acted as Treasurer of the same Sacco from 1996 to 1997.

Lady Justice Hannah Okwengu was the recipient of the Law Society of Kenya Award for distinguished service in the Administration of Justice for the year 1998.