Mr Nyachae full name is Charles Ayieko Nyachae. He was born in Kisii County in 1958. He was the former Chairman of the Constitution of Kenya Implementation Commission – CIC.

He was the Chairman of the Constitution of Kenya Implementation Commission – CIC from 2011 to 2016.

Mr. Nyachae is an experienced lawyer in his own law firm Nyachae & Ashitiva Advocates. He has practised Commercial and Property Law for over 26 years.

He is a former Council Member of the Law Society of Kenya. 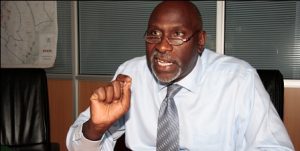 Charles Ayieko Nyachae has chaired the Kenya chapter of the International Commission for Jurists and has also been the Chairperson of the Institute for Education and Democracy, IED.

Mr. Nyachae formerly served as a Commissioner with the Kenya Law Review Commission and sits on the board of the Center for Governance & Democracy. He has vast experience in Human Rights, Democracy & Electoral laws.

Charles Ayieko Nyachae’s grand Father is the Late Mzee Musa Nyandusi who was a powerful and wealthy colonial Chief in the Gusii Region.

His late father is Simeon Nyachae. He was a provincial Commissioner and a powerful cabinet minister in the Moi and Kibaki regimes.

Charles Ayieko Nyachae’s family is a very large one. His grandfather had 15 wives and over 100 children. Some of the notable members of his family including brothers, sisters, cousins, nephews and nieces are

Nyachae’s Sister is Judy Nyachae and brother Kenneth Bitange Nyachae who were appointed to the Export Processing Zone and the Kenya Civil Aviation Authority boards respectively by President Uhuru Kenyatta.

Charles Nyachae’s cousin Violet Omwamba was appointed to the Lake Victoria South Water Services Board, while his other cousin Christopher Ayienda was named board member at New Kenya Co-operative Creameries Limited by President Uhuru Kenyatta.

Another cousin, Samwel Nyanchama, was appointed to the Energy Regulatory Commission Board.

His Brother Lee Nyachae is a big-time contractor and was at the centre of retired President Kibaki’s campaigns and in 2013 joined President Uhuru Kenyatta’s team.

Charles Ayieko Nyachae Met his wife in 1988 in Nairobi during a friends party. Detractors, however, claim that he has no wisdom and capacity to set up a family and home.

Mr Nyachae is being touted as the Successor of the Current Chief Justice Willy Mutunga after his early retirement in June 20, 2016.

The Jubilee government is torn between him Former National Assembly Speaker Kenneth Marende who quit ODM party and passively joined the Jubilee Coalition.

Rumours has it that his Simeon Nyachae is very concerned that his family will be left in political oblivion if his son Charles Ayieko Nyachae doesn’t clinch any political seat come 2017. He held talks with Uhuru Kenyatta to help him in that case.

Charles has been involved in many fund-raising in Kisii county making governor Ongwae to feel threatened by these developments. One of Governor Ongwae’s lieutenants told Charles that his league is not in Kisii Village politics, he should go and try his luck in Nairobi or aspire to be William Rutos running mate in 2022.

Nyachae Charles has however not publicly declared which political position he is going to vie for. But it is either the Chief Justice or the Kisii gubernatorial seat.