Prof. Kindiki full name is Prof. Abraham Kithure Kindiki. He was born in 1973 in Irunduni village in Mukothima Ward in Tharaka Nithi County.

He was until June 2020 the Senate Deputy Speaker, Senator for Tharaka Nithi County and Former Senate Majority Leader.

The current Jubilee Party Chief Whip Irungu Kang’ata successfully planned to ouster him from the seat after he absconded and invitation by President Uhuru Kenyatta to Statehouse Nairobi for a parliamentary group meeting for the senate.

Prof. Kithure Kindiki completed his secondary School at Lenana School (formerly the Duke of York School) then in 1994, he was in the pioneer class of Bachelor of Laws (LLB) in Moi University, Kenya. He graduated in 1998 with a Law degree.

After an exemplary performance, he was retained as a graduate assistant before receiving a scholarship to study for his Master of Law and PhD at the University of Pretoria.

In 2000 he graduated with Master of Laws (LLM) in International Human Rights Law and Democracy University of Pretoria, South Africa.

He continued with his studies and in 2002 he graduated with a PhD in International Law, University of Pretoria, South Africa.

2000 (October) to 2001 (March): Resettlement Consultant, Legal Unit/ Division of International Protection, UNHCR, Branch Office for South Africa, Pretoria. The functions of this post required me to carry out legal protection work on behalf of refugees and asylum seekers in South Africa. I was involved in refugee status determination, advising refugees and asylum seekers on their rights under national and international law and recommending durable solutions for them on a case-by-case basis.

He has published many articles in peer-reviewed journals and has acted as a consultant for the United Nations High Commissioner for Refugees (UNHCR), the United Nations Development Program (UNDP) and other international and national organizations.

He is a member of the Academic Council on the United Nations System (ACUNS), the International Association on the Study of Forced Migration (IASFM), the Law Society of Kenya (LSK) and the International Commission of Jurists (Kenya Chapter) (ICJ-K).

In April, 2008, He had been appointed Secretary of Cohesion in the Justice Ministry at a salary of Ksh. 500,000, but complained there was no political will to address the huge challenges facing the country at the time, including the resettlement of Internally Displaced Persons. He resigned from the job “as a matter of principle” after only 100 days in office and went back to lecture at the University of Nairobi. 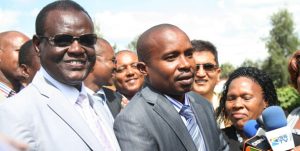 Prof. Kithure Kindiki says the first propulsion to active politics was in 2008. “It was while we were tabling the National Cohesion and Integration Bill which gave birth to the National Cohesion and Integration Commission that Mr Ruto walked to where we were sitting and told me: “Congratulations on your appointment, but I think you are in the wrong place. You will serve this country better if you join politics.” Then they parted ways.

In 2011, William Ruto enjoined Prof. Kindiki as one of his Lawyers for his ICC cases. This catapulted Kindiki to the political limelight and national fame because of the publicity the case attracted.

Prof Kindiki had been expected to vie for the Tharaka parliamentary seat in 2013, but his driving ambition led him to the Senate. Area MP Mburi Muiru had received praise from constituents for improving education standards so Prof Kindiki decided to support him for a second term while he went for the Senate seat.

The need for regional balancing further favoured him. Tharaka Nithi is basically divided into two: the agriculturally rich zones Maara and Chuka-Igambang’ombe constituencies and the drier Tharaka Constituency.

With the strong gubernatorial candidates, TNA’s Samuel Ragwa (the eventual winner) and APK’s Petkay Miriti coming from Maara and Chuka-Igambang’ombe respectively, natural justice suggested the senator ought to have come from the lower side. He easily defeated APK’s Kaburu Njeru.

But party intrigues bothered him. He was torn between The National Alliance and the United Republican Party which had both seconded him to the technical team during the negotiations that gave birth to the Jubilee coalition. He settled on TNA.

Prof Kithure Kindiki married his wife Joyce in early 2001. She is a university lecturer.

Kindiki’s mother is a Methodist cleric and a housewife. She lives in Irunduni village Tharaka Nithi County.

Prof. Kindiki has nine siblings and all of them have attained at least a Master’s degree. His elder brother, Prof Nyagah Kindiki is a professor in Moi University.