Joseph Ole Lenku was born on October 20, 1970 in Lenkisim sub-location, Entonet location in the Loitokitok Division,

Ole Lenku is a graduate of the University of Nairobi, where he obtained his Master of Business Administration in strategic management and Bachelor of Commerce in marketing.

In 1987, Ole Lenku proceeded to the Nakuru High School, where he attained his Kenya Certificate of Secondary Education in 1990.

Ole Lenku was admitted to study at Kenyatta University. However, he proceeded to the Kenya Utalii College where he attained a diploma in hotel management in 1995.

He then proceeded to the University of Nairobi where he graduated in 2006 with a Bachelor of Commerce in marketing and a Master of Business Administration in strategic management.

Joseph Ole Lenku was Cabinet Secretary for Interior and Coordination of National Government from 2013 to 2014.

He has worked in different management positions for various hotels in Kenya and Tanzania.

On 23 May 2013, Ole Lenku was appointed Secretary in President Uhuru Kenyatta's cabinet, surprisingly with no experience on security matters.

During his first year in office, Ole Lenku steered significant reforms in the security sector, including a robust crack-down on drug trafficking, reforms of the police force and increase in its budget and devolution of security.

In the wake of the terrorist attack on the Westgate Mall in September 2013, Joseph Ole Lenku spearheaded the rolling out of a new security framework known as "Nyumba Kumi".

On 17 June 2014, Lenku dismissed calls for his resignation by the opposition and civil society led by the Law Society of Kenya (LSK). On 25 June 2014, Member of Parliament for Kisumu Central Ken Obura, a member of the Coalition for Reforms and Democracy (CORD), gave a notice of the motion to impeach Ole Lenku, who fought back as the motion collapsed when the opposition quickly retreated.

Ole Lenku spent his childhood like other Maasai boys in rural areas, herding goats and sheep, running errands and undergoing the necessary ceremonies, rituals and rites of passage in line with Maasai culture.

His father Lenku Ole Mpaa Kapei was a senior chief in Kajiado South. A respected leader of the Iterito age-group of the Maasai, he is reputedly one of the wealthiest Maasai leaders with more than 2,000 heads of cattle and a large family. His mother, Sentema Lenku, also hailed from a lineage of powerful Maasai family.

Lenku was Cabinet Secretary for Interior and Coordination of National Government from 2013 to 2014.

Ole Lenku is a graduate of the University of Nairobi, where he obtained his Master of Business Administration in strategic management and Bachelor of Commerce in marketing. He has worked in different management positions for various hotels in Kenya and Tanzania. 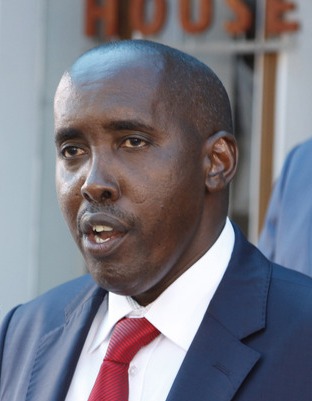