Deputy President William Ruto said on Thursday last week in Kakamega that there is no way CORD leader, Raila Odinga, can beat President Uhuru Kenyatta in an election even if he vies for the Presidency 1,000 times.

Ruto, who was speaking in a cultural event, also claimed that the Jubilee Government will secure re-election in 2017 because CORD has no agenda for the country apart from engaging in cheap propaganda. 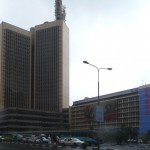 “If they did not defeat us when they were Prime Minister and Vice President, while the President and I were nobody, do you think they can do it in the next election? That is like dreaming during the day,” said Ruto.

Ruto’s remarks sent opposition leaders into panic mode and they wondered why Ruto is so confident of beating CORD Alliance in 2017.

Opposition leaders and supporters are now claiming that the Deputy President is confident of beating CORD in 2017 because they have already put up infrastructure to rig the 2017 Presidential Election.

Impeccable sources within the opposition opine that the Jubilee Government has already hired Chinese hackers who will try to manipulate the Independent Electoral and Boundaries Commission (IEBC) servers in 2017 so that they can rig the poll.

The source also said that the Jubilee Government has already set a vote tallying centre on the 11th and 12th floors of Teleposta Towers using technology provided by the Chinese and it will be hard to beat Uhuru/ Ruto in 2017.