Barely two months after her resignation as Devolution Cabinet Secretary, Miss Anne Waiguru has landed a new job with a Nairobi based Non Governmental Organisation (NGO).

On Sunday, Waiguru said on social media that she has partnered with a youth-focused organisation in Nairobi aimed at empowering Kenyan youths economically.

“This partnership will be giving out motor bikes to youths who can use them for economic empowerment as from January 4,” Waiguru posted.

The partnership, Waiguru said is built on a plan she had designed while at the Planning and Devolution Ministry which, she claims, is still an envy to everyone in and outside Kenya.

“The blue print about the youth development I had as the CS will always be envied not only within Kenya, but all over the World. I have learnt to live with enemies,” said Waiguru.

This is a huge blow to CORD leaders led by Raila Odinga who were hoping that Waiguru will remain jobless for centuries.

Waiguru resigned last month after pressure from opposition leaders who accused her of siphoning Sh 792 million from the National Youth Service (NYS). 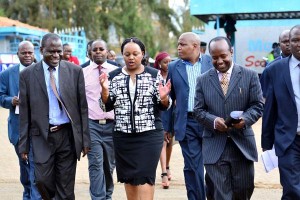