If you see what MAINA KAGENI posted you will never elect RAILA in 2017! Is this real?

Classic 105 presenter, Maina Kageni, who travelled to Kisumu over Christmas posted a bizarre roadside signboard that he came across as he toured sections of Luo Nyanza.

Maina said that he came across this poster in East Karateng Sublocation in Kisumu County where anti-defecation campaign bill boards are even displayed in major roads.

Maina, who is a Kikuyu, even asked for a Luo translation because he never thought that this time and age, there are people who defecate openly like animals.

Kisumu County is an opposition stronghold and this incident is an embarrassment to CORD leader, Raila Odinga, who is planning to lead the country after 2017.

Majority of Maina’s fans who commented on this post said they were shocked to hear that there are people who defecate in the open at this time of the digital revolution.

Many wondered what Kenya will become if Raila Odinga is elected the President.

“It means if Raila Odinga becomes president, the whole country will become an open sewer,” one follower wrote on Maina Kageni’s Facebook page.

Here is the picture that was posted 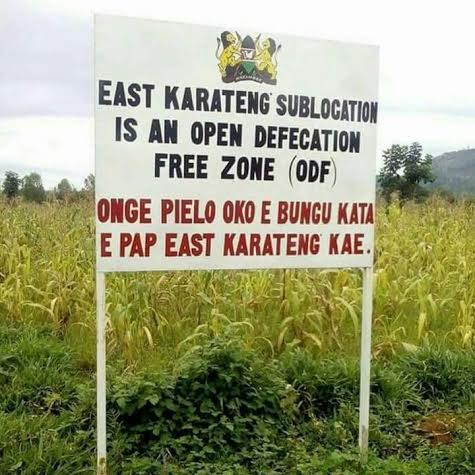