He is the Member of Parliament for Kaiti Constituency in Makueni County. He was elected to the 11th Parliament on a Wiper Democratic Movement Kenya (WDM-K) ticket in the CORD Coalition in March 2013.

He was elected Member of National Assembly after many unsuccessful attempts to clinch the seat, taking over from Gideon Ndambuki who had quit the parliamentary race to run for Makueni Senator seat in the same general election but lost the Wiper Democratic Movement ticket to the late Mutula Kilonzo who would eventually be elected senator.

In the National Assembly, he is a member of Board of Directors of Departmental Committee on Education, Research And Technology since March 2013.

Makenga Katemi has spoken 192 times in Parliament since March 2013. 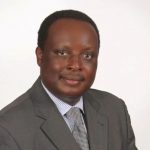 In 1990 he started Private business and became a Businessman in the Clearing and forwarding sector.

Speaking at Kola market on the boundary of Makueni and Machakos counties during the carpeting of the road Makenga said: “The government should consider this road a highway. It is going to help Machakos and Makueni residents.” He said through his efforts, the national government agreed to give money for the repair of the road, which had many potholes.