Peter Safari Shehe was born in 15th December 1955 in Ganze District of Kilifi County. He is from the Kauma Community of the Mijikenda.

He is half Kenyan and Half Swizz since He was born in Kenya but lives in Switzerland with his entire family.

He attended Catholic Intermediate School, here in Kenya. After he went to Switzerland in 1989 he pursued a course in Commercial Business in Migros Klubschule, Switzerland and completed in1996.

He also enrolled for a Diploma in Chemical Analysis in Kaufmann, Switzerland and completed in 2005.

From 1977 to 1989 Peter Safari Shehe worked at Kenya Cashew Nuts Company in Kilifi. In 1989 he went to Switzerland and worked in a Large Supermarket called Migros Retail Company, Switzerland. 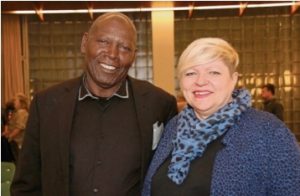 In 1999 he became a Facility Manager at Unique Airport Zurich, Switzerland until 2001.

In 2001 he started his own company called Shehe Cleaning Company, Switzerland.

In 2009 he became a Facility Manager at Immo-Facility Triesern, FL until 2012.

Mr. Safari Shehe vied for the Ganze MPs post and won in March 2013 polls. He is the Vice Chairman of Committee on Powers and Privileges of the National Assembly of Kenya. He is also a member of the Departmental Committee on Public Works, Roads & Transport.

In July 2015, High Court in Malindi stopped the DPP from prosecuting Ganze MP Peter Safari Shehe and nine others over corruption allegations in managing the Constituency Development Fund (CDF).

The EACC accused Mr Shehe and his associates of looting over Sh40 million from the Ganze CDF fund.

Also to be charged with Shehe are four directors of Worldrone Plus Ltd and Ng’ombe Mwende Suppliers. Shehe was being charged with crimes ranging from engaging in projects without proper planning and procurement procedures.

EACC said Shehe and his associates embarked on a year-long looting spree of the Ganze Constituency Development Fund (CDF), that started almost immediately he was sworn in as MP, leading to a loss of Sh40 million.

Safari Shehe initially had a wife here in Kenya before meeting with his Swiss wife who had come to Kenya in 1989 as a tourist.

The first meeting between Mr. Safari Shehe and the Swiss lady was quite dramatic. The two tourists were on holiday when fortunately or unfortunately their truck got a puncture. Peter Shehe who by then worked for the Kenya Cashew-nuts company came along and found the two tourists stuck and offered them some help with his truck.

One thing led to another and eventually in 1989, Peter made the tough decision to leave his four kids that he’d had with his ex wife and moved to Switzerland.

He married a Swiss lady in April 1990 there in Winterthur, Switzerland. Ten years later his other four children joined him in Switzerland.

Safari Shehe has four grown up children who live in the Switzerland. These are the children he bore with his first wife.