Mwanaisha Chidzuga is a News Anchor for K24 Wikendi. She grew up in Kwale, Coastal Kenya. Previously she worked for KTN, BBC, Pwani FM and KBC.

Mwanaisha Chidzuga is one of the longest serving, not forgetting most popular and most talented Kiswahili news anchors in Kenya today. Her exit from KTN in August 2015, left many people wondering what went wrong but she was not the only one who was fired. It was a problem with the Media House.

Mwanaisha was said to be one of the high-profile employees who had been sent home during Standard Group’s infamous massive retrenchment.

According to a reliable source, Mwanaisha was fired as she made her way to the set of her new show ‘Maisha na Isha’.

She then allegedly left her guests stranded when she was handed the dreaded ‘redundancy’ letter.

Apparently, her sacking elicited its fair share of drama with her lawyer husband, Danson Mungatana even threatening to sue Standard Group for wrongful dismissal. She even contemplated quitting her careers.

Mwanaisha attended Ziwani Primary School and became the very first girl from the area to go to a National School. She Joined Kenya High School in Nairobi.

She joined Moi University-Nairobi Campus for her degree in BSc. (Communications and Public Relations)

From November 2015 Mwanaisha Chidzuga has been working with Mediamax Network Limited’s K24 TV. This was 3 months after leaving KTN Kenya.

Mwanaisha’s first job (soon after high school) was at Pwani FM where she worked as a radio presenter / DJ. How she got her first opening was by chance. “I had accompanied my friend for the interview when I was requested to try it too and I got the job!” she simply explained. It was one of the best decisions she has ever made.

She later moved to Idhaa ya Kiswahili – a Kenya Broadcasting Corporation (KBC) station. These two first jobs were not easy but she got training in presentation and production from professionals like Khadija Ali, Leonard Mambo Mbotela, Zainab Azizi and Elizabeth Obege. “Some of the lessons I learnt at Idhaa were that to be successful in broadcasting, one must strive to be original-do the right thing differently and take criticism positively,” she offers.

After KBC she joined KTN where she has been for a very long time.

If there were any remaining doubts regarding the relationship between Mwanaisha Chidzuga and politician Danson Mungatana, they have been well quashed by the K24 news anchor.

Mwanaisha Chidzuga told off former Miss Kenya Cecilia Mwangi and confirmed that former Garsen MP Danson Mungatana is her husband. She took to social media to flaunt her adorable family. The photos show her incredibly beautiful daughters, including a grown up Aryanna Zeyna Mungatana, whom Mwanaisha welcomed in mid 2014. 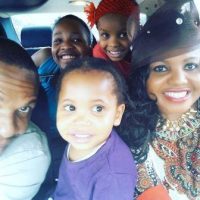 Mwanaisha Chidzuga in 2014 gave birth to her third child (a girl) and named her Arryana Zeyna Mungatana. She now has three daughters.

Mwanaisha Chidzuga’s mother is called Zainab Chidzuga. She grew up in a large family of five girls and three boys. Isha’s family was not so well off, but they never lacked the basics