Mohamed Adan Huka was born in Mandera County. He is the MP for Mandera South Constituency having been elected to the 11th Parliament on a United Republican Party (URP) ticket in the Jubilee Alliance.

Mohamed Huka was first nominated by the Council of elders of the dominant Gurreh community in Mandera County.

Part of the council of elders mandate was also to unite the Gurreh clan to sweep all the other seats in the county.

In his Constituency, he is famosly known as Mwalimu Huka.

In the National Assembly he is a member of the Departmental Committee on Education, Research And Technology from March 2013. 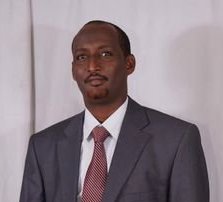 Mohamed Adan Huka has spoken 63 times in Parliament from March 2013 until April 2016.

Mr Huka said Mr Duale was among leaders who embarked on peace campaigns in North Eastern Kenya and had thus “delivered his promise to Kenyans”.

“There is no need of singling out Mr Duale. North Eastern leaders had a three-day consultative meeting, where the promise was made and the media together with other individuals have capitalized on it,” said Mr Huka in his constituency.

He said Mr Duale is not a “prefect of criminals to be knowing them by name”.