Maalim Mohamud Mohamed was born on 4th July, 1953 in Mandera County. He is the MP for Mandera West Constituency. He was elected in 2013 to the 11th Parliament on a URP ticket (Jubilee Coalition)

From 1963 to 1969 Maalim Mohamud Mohamed was a Primary School Student at Elwak primary school.

From 1969 to 1972 he was a Secondary School Student at Wajir High School where he sat for his EACE exams.

From 1973 to 1974 he was a high school student at Nakuru High School where he sat for his EAACE.

From 1975 to 1978 he was an Undergraduate Student of Bsc Civil Engineering at the University of Nairobi.

From 1978 to 1980 he did his Msc in Environment health engineering at the University of Nairobi.

Maalim Mohamud Mohamed was Engineer and Deputy Director at the Ministry of Water between 1978 and 1989.

From 1989 to 1996 he was Chief Engineer of National water conservation and pipeline cooperation. 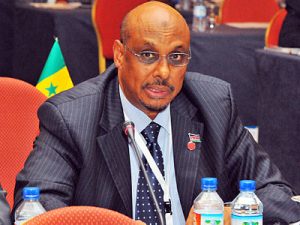 Between 1997 and 2003, Mohamed Maalim was Ambassador to Arab Republic of Egypt with accredential to Morocco, Tunisia, Algeria & Eritrea in the Ministry of Foreign Affairs.

In 2007, Mohamed Maalim ventured into elective politics and was Member of Orange Democratic Movement representing Mandera West between 2007 and 2013.

Between 2008 and 2013-03-04 he was Assistant Minister of Energy (Electricity and Renewable Energy) in the Coalition government Cabinet.

Mohamed Maalim was a Member of House Business Committee between 2008 and 2013.

He has been Vice-Chairperson of Departmental Committee on Public Works, Roads & Transport and also a Member of House Business Committee since 2013.

A report released by the Mzalendo Trust has revealed Mohamed Maalim was one of the worst performing Members of Parliament in the 2015 August House proceedings.

According to the survey 27 MPs including Mohamed Maalim remained silent in all the debates held in Parliament in 2015.