Joseph Lekuton full name is Joseph Lemasolai Lekuton. He was born in Laisamis in Marsabit County. He has been the MP of Laisamis Constituency in the 9th Parliament from 2006 following the death of Titus Ngoyoni. There was a by-election and he won the seat under the KANU party ticket.

The Maasai born Joseph Lekuton shot at education was by ‘accident’ after his older brother who was chosen to go to school but he did not want. 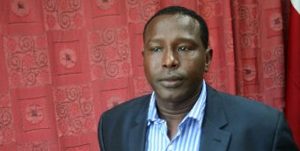 At the age of 6, he had already started his education at the missionary boarding school in Laisamis. 8 years later, Joseph Lekuton finished his primary education but he could not continue his education due to lack of school fees. But fate as fate would have it, former President Daniel Moi happened to know about the young Joseph Lekuton and offered him a scholarship at the Kabarak High School.

He then cleared his A levels doing well in his final exams and then received a letter of admission at St Lawrence University in the US under the scholarship for the African Students.

In four years, Lekuton graduated from St. Lawrence with both a Bachelor’s in Economics and government and a master’s degree in Education at Harvard University all under a scholarship programme.

After completing A-levels education from Kabarak High School he got a job at bank as a clerk.

While still studying in the US, he spent 10 years teaching American history at the Langley School in Northern Virginia.

Joseph Lekuton was named a National Geographic Emerging Explorer for his work in sharing the culture of Kenya with America, including efforts to share educational resources with nomadic children through the BOMA Fund and Cows for Kids.

He was then sponsored by the National Geographic to write a book called Facing the Lion: Growing Up Maasai on the African Savanna which was used to educate about the challenges of Nomadic community in Kenya.

His passionate actions have led to a number of accolades and prestigious awards, including Kenya’s Order of the Grand Warrior, a presidential award for exemplary service to his nation.

Joseph Lekuton is the youngest of three boys in his family. His mother and father are nomads in Laisamis. They come from the Ariaal clan of the Maasai.