He was elected to the 11th Parliament on an ODM  ticket in 2013. He is a first time MP. He beat his incumbent MP Danson Mwazo Mwakulegwa to clinch the ticket.

In the National Assembly he is a member of Departmental Committee on Finance, Planning and Trade since 2013.

In November 2014, Jones Mwagogo Mlolwa was said to have lied to Voi Residents concerning compensation of land owners following the construction of the Standard Gauge Railway.

A nominated Taita Taveta MCA accused MPs Jones Mwagogo Mlolwa (Voi) and Thomas Mwadeghu (Wundanyi) of insincerity. John Maghanga told journalists in Wundanyi town that Jones Mlolwa had promised that the construction of the standard gauge railway will be halted until compensation is released. But two weeks later Mwadeghu and Mlolwa met the then Transport Cabinet Secretary Michael Kamau over the compensation but the construction went ahead without compensation. 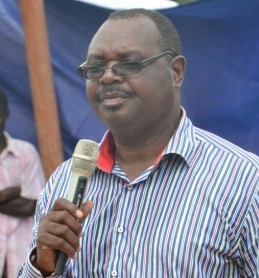 In April 2014 Coastal leaders mooted a plan to form a Coastal political Party to bargain for the Coastal people in the National Government.

Matuga MP Hassan Mwanyoha, Voi MP Jones Mlolwa, Kinango MP Samuel Ngozi Rai and Andrew Mwadime of Mwatate said that Coast leaders had decided to change the political landscape in the region. Dori said that they would have no problem supporting Jubilee if their electorate will get services from the National Government.

Voi MP Jones Mlolwa said that they need to be united so that the region is counted in government in 2017.

In 2015, residents of Voi constituency said that Hon. Jones Mlolwa deserved nothing more than 57.2% in approval, a mark which according to Infotrak survey’s average of 59.9% is way below the pass mark.

Jones Mwagogo Mlolwa was not only ranked the poorest MP in the county but also got below the average.

Jones Mlolwa is a good friend of Taita Taveta County Governor Eng. John Mruttu. He does not oppose the governor like his colleague Thomas Ludindi Mwadeghu of Wundanyi who was opposed to the location of Taita Taveta County Headquarters. Thomas Ludindi Mwadeghu Wanted the Headquarters to be in Wundanyi but the Governor preferred Mgeno in Mwatate Sub County.

Other MPs who approved of the location are the County Woman Rep. Hon Joyce Lay, and Mwatate MP Hon. Andrew Mwadime.