Ibrahim Ahmed Sane was born in Hola Tana River County on 23rd June 1974. He is the MP for Garsen Constituency having floored Danson Mungatana in the 2013 general elections on a URP Party ticket.

Ibrahim Ahmed Sane was Accounts Clerk of Kenya Airports Authority (KAA) between 1996 and 2004 then he became the Coordinator of Men for Gender Equality Now MEGEN between 2004 and 2011.

In the National Assembly he is a member of Departmental Committee on Defence and Foreign Relations.

From 1998 to 1999 he pursued a  Certificate course in Computer Operations at Sitawi Computer College in Malindi.

From 2008 to 2010 he pursued a Diploma in Conflict Management at Vision Empowerment Training Institute.

From his teenage years, Ibrahim Ahmed Sane hated some customs in his community like early girl-child marriage. 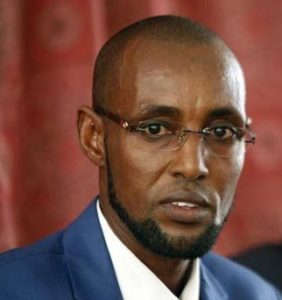 He knew from the word go, that the choices he was making, had dangerous consequences ahead, after defying warnings from the hierarchy of elders, the then powerful council of elders drawn from the Orma and Wardei communities.

And even after he got wind that he risked losing his identity and respect, from an imminent verdict that almost rendered him an ‘outcast’, for going against retrogressive cultures and traditions that saw girls as young as 9 years, presented as brides to men over 40 years, to Sane, the battle line had been drawn and there was no turning back.

And even though he made many enemies and friends in the course of his mission, today, he is a celebrity in his own right.

At 37 years (in 2013), Ibrahim Ahmed Sane campaigned into the hearts of the masses and effortlessly, he was able to change the voting patterns to his favour, flooring political giants like the immediate former MP Danson Mungatana.

Opinion leaders in Tana River say Ibrahim Ahmed Sane is a very strong leader, a fact that the Jubilee government is very much aware of, and as such, has kept him close. Deputy President William Ruto and Sane are great buddies, but there is no telling where that relationship is destined to. To analysts, Sane is better off your friend than your enemy, in matters politics!

Ibrahim Ahmed Sane is being touted by pundits to challenge the incumbent governor Hussein Dado for that seat come 2017.

Ibrahim Ahmed Sane made arrangements and had her flown back to the country, a gesture that touched the hearts of many, and only went on to prove how dedicated and passionate a leader can be on matters education.