Ibrahim Abdi Saney was born on 22 December 1975 in Korondille town of Buna District, Wajir County. He is the Member of Parliament for Wajir North Constituency in Wajir County. He was elected to the 11th Parliament in 2013 on an ODM ticket (CORD Coalition) as a first time MP. He defeated his opponent Dr. Abdullahi of KANU.

In the National Assembly he is a member of Departmental Committee on Administration and National Security from 2013.

Before joining politics in 2012, he was the CEO of a local Community Based Organization in Wajir County.

Hon. Ibrahim Saney has spoken 122 times in the National Assembly from March 2013 till April 2016. 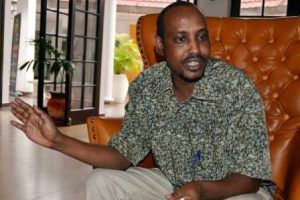 In May 2015, Wajir North MP Ibrahim Saney asked the government to focus on nurturing trust among Somalis in order to win the war against Al-Shabaab.

He said mistrust between government security agencies and local communities in the northeast has been the major hindrance to the flow of intelligence. “By enlisting Kenyan Somalis, they will own the push,” he said. “That way, we will begin to see significant change.” Hon. Ibrahim Saney said local residents feel unfairly targeted in the current war against the terrorist group.

He claimed that apart from being left to their fate, those who have offered vital tip-offs to the police have been betrayed by the government.

In May, 2015, Hon. Ibrahim Saney, the Wajir North MP was ranked among the bottom five out of the 290 elected MPs by Infotrak Research & Consulting.

He scored 43.5 per cent after researchers inquired about his performance from his constituents.

He reacted by saying, “My performance will be rated by my constituents and I won’t mind about an opinion by someone sitting in an office in Nairobi.”