Abass Sheikh Mohamed a.k.a Abass KK was born in 1958 in Wajir County. He is the member of Parliament for Wajir East Constituency having been elected to the 11th Parliament on a United Republican Party (URP) in the Jubilee Alliance.

In the National Assembly he is a member of the Departmental Committee on Defence and Foreign Relations since 2013.

I am the Chief Executive Officer (CEO) of the Kenya Livestock Marketing Council (KLMC).Went 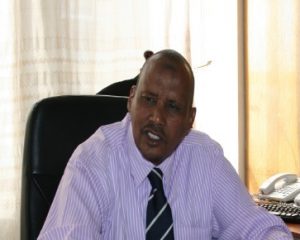 He obtained a Post-graduate Diploma in Sustainable Local Economic Development IHS from Erasmus University in The Netherlands, and MBA in Strategic Marketing.

Abass Sheikh Mohamed is a family man with five children

In June, 2013, a team of political and community leaders from Wajir County came under gun ambush in Burmayo village from suspected clan militia during a tour to assess humanitarian needs sparked off by the inter-clan conflict that rocked Wajir and Mandera Counties.

The leaders led by Wajir Senator Abdirahman Olow and Governor Ahmed Abdullahi and Abass Sheikh Mohamed were caught up by the armed militia, who were burning deserted traditional houses by the time the leaders arrived at the village at 11.30am.

The assailants were seemingly hiding behind nearby hills and monitoring their movement before opening fire on them shortly after they disembarked from their vehicles to assess the damage and displacement caused by the conflict pitting Degodia and Garre.

“The bandits opened fire on us moments after; we started moving around the deserted and seriously burnt village. The attack was so sudden that we were found unaware, but luckily none of our team was hurt in the unfortunate incidents” Abass Sheikh Mohamed Said.