Hussein Mohammed was born and raised in Meru County. He is a KTN Kiswahili News presenter and reporter. He joined KTN in 2012. At KTN he has been nicknamed Fiber after the Jamii Telecom cartoon funny character ‘This is Fimber” due to the shape of his head.

Hussein went to Kanyakine High School in Meru County and thereafter in 2011 joined Zetech College to pursue his passion in Photography and partly in Journalism.

In high school I was the Chairman of the Journalism Club; a role that I came to play again while at Zetech College. In both institutions I aimed at inspiring and developing the art of Swahili journalism. 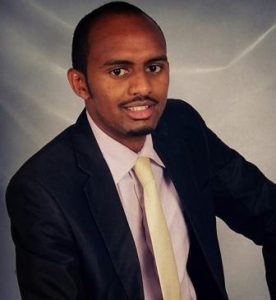 On a light note, After completing college, Hussein used to tell people he was on attachment, but in real sense he was out and about building his own portfolio. When asked about ‘the attachment’, he would tell them that he was working with ‘Kenya Tarmacking Network’ (KTN).

Throughout his ‘Kenya Tarmacking Network’ period, bought a DSR camera and began doing events such as burials, weddings and other college events to keep him busy and build his skills and competencies. He had also applied for jobs at almost all Media Houses. He was called for an interview at Radio Umoja but he didn’t sail through. After the long quest, He was called by KTN for an interview carried out by Ahmed Darwesh, he knew he had finally made it.He has been working with KTN since 2012.

Hussein Mohammed wanted to be either a lawyer or a journalist, but God seemed to have the right career for him and so he ended up doing something that he loves; Journalism!

He is an Arsenal die-hard.

He is not yet married. He claims he does not have a girlfriend.