Huddah Monroe was born in 10th October, 1991 in Eastleigh Nairobi Kenya. She was brought up in Huruma Estate. Her real name is Alhuda Njoroge.

She is a Kenyan socialite who ekes her living in modelling, curtain raising events, products promotions and personal business.

Huddah Monroe rose to fame in 2014 after she clinched the coveted slot of representing Kenya in the Big Brother Africa – BBA reality show in South Africa.

Huddah Monroe went to Kajiado Hills Girls Academy. She also attended several other schools after she was expelled from one school due to truancy and delinquency.

After high school, she ventured out into freelance modelling, computer studies and did a diploma in programming.

Huddah Monroe first worked as a secretary for an architecture company immediately after high school at age 16.
Due to lack of professional qualifications she was fired by her boss.

Being a beautiful lady, she later got connected to Calif Records and she featured in several music videos. She later modeled for several commercials and earned handsome amounts of money which she invested in debentures for an oil venture and earned some extra income.

Being in the limelight she was pushed by twitter fans to join BBA and she made it in BBA.

Huddah Monroe was born from a Somali father and a Kikuyu mother. Her biological father died when she was still very young. Later on her mother remarried. 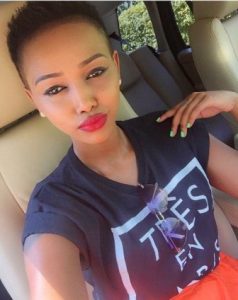 In the new family Huddah faced harsh upbringing at her home with lots of domestic conflicts. This made her to run away from home when she was still a young child. She couldn’t take it any more. She used to live with her four stepbrothers, and a stepfather who were not so good to her.

The harsh realities she faced in her life made her to develop a tough skin and unapologetic nature. This got herself titled “The Boss Lady”

Huddah Monroe says her nude photos are not meant to provoke the public, but for commercials, they are done professionally.

Huddah has a tattoo inscribed in french as a flower rebel.

Huddah Monroe is one of the Kenyan socialites who have massive following from the Kenyan Youths . Huddah , together with Vera Sidika, have contributed in incorporating the western culture among the youths. Her popularity shot up when she participated in the Big Brother Africa event in South Africa. Even though she did not emerge the winner, she managed to gain fame not only among Kenyans but also several youths across the world.

Huddah Monroe confessed that she once abused drugs. She claimed that her loss of weight was due to the rehab that she was undergoing. She mentioned this in response to one of the claims that she was HIV positive. She explained that she is HIV negative and that the weight loss that bothered many had nothing to do with her health.

Huddah Monroe says she was bisexual. “I used to do all this things when I was naive and a girl who didn’t know what she needs in her life. But now I’m focused and I want to focus in me so all these things I have put them aside.” Huddah Monroe says.

Huddah Monroe says Prezzo is not only a close friend but also her mentor. They bumped on each other on the streets of Nairobi and a chemistry began.

Huddah used to live in the same house with CMB Prezzo. This was after Huddah ran into problems with her Landlord over regular increase in her house rent. Although she claims that they slept on separate bedrooms, questions on how this can be possible were always arising. But to the public it is knows they were  boyfriend and girlfriend.

According to Huddah Monroe, they started parting ways after CMB Prezzo started talking ill about her in public. They had a bitter spat in the social media and blogs and they parted ways. They no longer see each other eye to eye.

The saga of Vera Sidika and Huddah Monroe is rather perplexing. Social Media pundits say their constant beer may be a ploy between them to make sure they remain relevant in social media and in the blogs. They want bloggers to constantly write about them which is good for their (Vera and Huddah) businesses.

In February 2016 Huddah Monroe and Vera Sidika took many by surprise after they ended their perennial beef going on to open up about their undying desire to smash each other but strangely in April 2016 Huddah wanted to slice open Vera’s throat!!! In this new twist of events, Huddah Monroe took to the social media to threaten Queen Vee and called her all sorts of names.

Watch the clip below to see how Huddah Monroe mauled Vera Sidika on social media:

Vera Sidika and Huddah Monroe have always tried to outdo each other in public as to who is the hottest socialite in Kenya.

Apart from being a socialite, Huddah doubles up as an entrepreneur. She owns her own clothing line called Huddah By Vazzi where she stocks assorted fashion items.

Now, she’s just landed herself a deal as a brand ambassador for a beauty product dubbed BrightenMi. According to the beauty company, Huddah Monroe was chosen because “she understands the importance of having great skin.”

Huddah Monroe advised persons she calls her haters and who are alleging that she is sleeping with men to make money to do same. 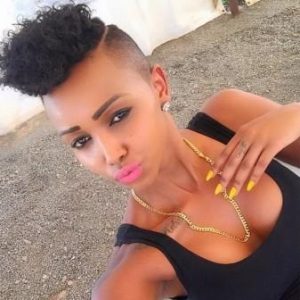 Huddah Monroel took to photo sharing site Instagram to vent her anger at persons, especially women, whom she said are passing judgment on her for lavish lifestyle.

According to her, she finds it difficult to come to terms with women putting her life under the radar and making wild allegations about her.

“Honestly, I don’t understand why women have to be the ones hating all the damn time. If you think my vagina is giving me the life I live then why don’t u use your vagina too to get a life instead of hating?” Huddah Monroe posted.

In another post Huddah Monroe says, “Today I feel like addressing some peasants here… Yah! We all know that gossip! Huddah has NO house, NO car, No man LOOOL! I don’t understand why bi**es (you know urselves) who think they have made it in life still follow a broke person’s life! Where I come from, a rich person is never bothered by a poor person’s life! But since you know u ain’t any better you have a small mind with a negative bank account that discuss people LOOL! Let a broke ni**a be and mind your own “Rich” lifestyles h**s!”

Huddah Monroe posted of a photograph of a ramshackle house she grew up in and said she was proud to have moved on from there to become successful. 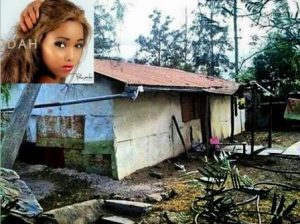 “This is where I grew up and I am very Proud! We haven’t even demolished this house coz it’s a Museum, holds a lot of memories. I’m thankful some of us don’t look like where we came from and we don’t pretend to be who we are NOT! All the rich people I used to know when I was young are all broke! It’s better to start from Rags than being born with a Silver spoon and learn to make it out here with no worries! This place taught me a lot and that’s why I am who I am right now! #F**kYourOpinions,” she said.