David Karithi was born on 18 December 1967 in Tigania, Meru County. He is the MP for Tigania West Constituency in Meru County. He was elected to the 11th Parliament on a The National Alliance (TNA) Party ticket in March 2013.

In the National Assembly he is a member of the Departmental Committee on Health from March 2013.

David Karithi has spoken 34 times on the floor of the house. Here is a list of the speeches he has made from March 2013 till April 2016. 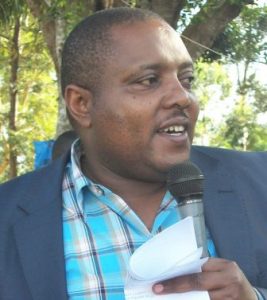 A report released by the Mzalendo Trust has revealed the worst performing Members of Parliament in the 2015 August House proceedings.

According to the survey made public, 27 MPs  including David Karithi remained silent in all the debates held in Parliament in 2015.

“Twenty-Seven (27) Members of Parliament did not contribute to plenary discussions in the National Assembly at all in 2015,” the Trust stated.

Mr. Karithi accused Mr Duale of interfering with Meru politics by trying to endorse a particular candidate to the Ameru people.

Mr Karithi said the electorate have the right to choose their own preferred candidate without being coerced into supporting certain aspirants.

In his speech during a fundraiser at St Pius X Seminary in Nkubu, Mr Duale appeared to support Meru Senator Kiraitu Murungi’s gubernatorial bid in the 2017 General Elections.

Mr Duale lauded Kiraitu for being a visionary and transparent leader but Mr Karithi said those interested in different seats should hunt for votes at the grassroots where voters are because  “they are our employers.”

In February 2016,  Tigania West MP David Karithi blamed persistent cases of cattle rustling on the Meru-Isiolo border on breakdown in the police command.

This follows two incidents of cattle rustling this week that left a herder killed and more than 140 cattle and 80 goats stolen.

He said the security officers have failed to enforce directives by the Interior Cabinet Secretary Maj Gen (Rtd) Joseph Nkaissery that chiefs in whose area stolen animals are found be held accountable.