Ali Wario was born on 5th May 1970 in Bura Constituency in Tana River County. He is the MP for Bura Constituency having been elected to the 9th and 11th Parliament in 2002 and 2013 on a KANU and TNA ticket in Jubilee Coalition respectively.

From 2004 to 2005 he did a Diploma in Social Work at the University of Nairobi and in 2010 he enrolled for Bachelor of Arts (Political Science) course. 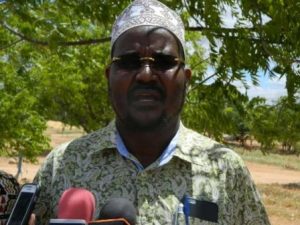 Hon. Wario dived into politics in 2002 when he was elected the MP for Bura Constituency on a KANU ticket. He was later given the post of Assistant minister for Home Affairs in 2003 until 2006. Between 2006 and 2007 he was the Assistant Minister for Special Programmes.

In the National Assembly from 2013, Hon. Wario is a member of Departmental Committee on Public Works, Roads & Transport.

Hon. Wario in April, 2016 Urged the Tana River county administration to take urgent steps to contain Cholera outbreak in the area. Wario said the county should focus on mobilizing health workers and stocking the required drugs.