Adan Keynan full name is Adan Wehliye Keynan. He was born on 10th October 1968 in Wajir County. He is the MP for Aldas Constituency in Wajir County. Before he was the MP of the Larger Wajir West from 1997 till 2013 except 2002 when he was defeated by Ahmed Mohamed Khalif.

Adan Keynan was elected to the National Assembly in 1997 on a Safina Party ticket and in 2007 on a KANU ticket. In 2013, he was elected on an ODM ticket (CORD Coalition)

In the National Assembly he has been a committee member of these committees;

Form 2013 he has been a member of Liaison Committee and Departmental Committee on Defence and Foreign Relations and he is the Chairperson of Public Investments Committee. 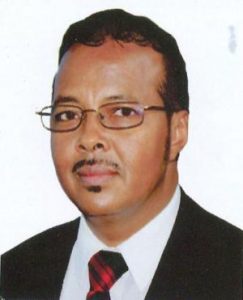 Adan Keynan was a Primary School Student at Rhamu Primary School from 1978 to 1985 when he sat for his Kenya Certificate of Primary Education (KCPE).

From 1986 to 1989 he was a Secondary School Student at Wajir High School and Garbatula High School.

From 1990 to 1994 he was an Undergraduate Student of Bachelor of Education (Arts) at Moi University.

From 1996 to1997 Adan Keynan was the Director of National Housing Corporation.

Hon. Keynan was the Vice-Chairman of the Parliamentary Service Commission of Kenya between 2008 and March 2013.

Hon. Keynan is a recipient of Spirit of Detroit Award in Michigan State, USA, (1999) in recognition of exceptional achievement, outstanding leadership and dedication to improving the quality of life.

He is also a recipient of an award in the Role of Legislatures in Economic Governance, Washington DC, USA, (1999).

In 2012 Hon Keynan was the Chairman of Kenya – Turkish Parliamentary Friendship Group.

In 2003, Adan Keynan was charged with murder of Sheikh Ibrahim Ali Abdulleh and his driver Mohammed Elley.

This resulted to demonstrations by members of the Somali community in Kenya as the murder persons were members of a peace delegate who were in Nairobi for peace talks. Keynan was later acquitted in 2005 after a 2 year long trial on grounds of no evidence.

In 2011, Adan Keynan was the beneficiary of ‘relief’ districts as the then president of Kenya, Mwai Kibaki created a number of new districts so as to reward loyalty. This led to outrage among the residents of Wajir West, he later managed
to calm them down with the promise of lobbying government to split Wajir West into a new district. This appeased the local community, they backed off and the new district was gazetted. However, the promise of a new district never came to fruition.

In 2012, Adan Keynan was singled out alongside Rachel Shebesh and Charles Kilonzo in an open letter as they were furious supporters of the bill that was rejected by president Kibaki. The MPs sought to increase their retirement bonuses of over $105,000. Despite being touted as a youthful MP with fresh ideas, Adan Keynan was furious at the president and the outrage of Kenyans. Other sources confirm that he was the sponsor of the Bill which awarded MPs a pay off of KSH. 9.2 million.

As a member of parliament, Adan Keynan has sponsored a number of bills which have been seen as controversial in the Kenyan Parliament.

On 21 March 2014, Adan Keynan sponsored The Order of Precedence Bill, whose main purpose was to strip recognition titles from governors and members of county assemblies.

In 2013, National Flag Emblems and Names Amendment Bill, 2013 Adan Keynan had sponsored a bill to clip the Kenyan governors the right to fly a flag on their cars.

In 2015, a bill sponsored by Adan Kenyan whose main intent was to grant Parliament the immunity to be scrutinized by media was passed. Keynan claimed to only be the vessel that carried the message however with his track record of sponsoring self-serving bills, it is highly implausible that he did not sponsor the bill.

On October 29, 2015, it was reported that Adan Keynan was sponsoring another self-serving bill. In the Bill he wanted to grant Members of Parliament diplomatic passports.[15] Part of the people to receive diplomatic passports will be MP’s their spouses and their children.

It is on record that the Wajir West Constituency prior to Adan Keynan entry into politics, did not have a single secondary school. But now that is history. The following are the schools which have built during Hon Adan Keynan’s tenure through his assistance.