The University of Nairobi – UON has been closed indefinitely following prolonged students riots. The riots were as a result of the re-election of SONU Chairman Babu Owino.

The riots have persisted fro Saturday, 2nd April, 2016 all through to 5th April, 2016. On Monday the student burnt down the SONU offices.

A special committee has reportedly been formed to interrogate the matter and what is the best way to deal with the SONU issue.

The University became ungovernable and this led to the UON Senate to Close the University until further notice.

What aggregated the situation was a video clip going round the social media showing police brutally beating up the University of Nairobi Students.

The clip is alleged to have been captured near or along State House Road where a group of about 30 students were lying on a muddy and wet ground as police armed with sticks and clubs canned them.

Some students could be heard wailing and screaming as they received the beating from the officers in turns.

A probe into a video circulating on social media platforms showing police assaulting University of Nairobi students has been launched.

Kenya police spokesman Charles Owino said they had not confirmed if the video was captured at the university. Nairobi police boss Japheth Koome too said they had launched a probe into the video and would take action

“We want to know if indeed the video was shot at the university and then we will launch investigations on how this happened,” said Koome.

Some students claimed police in anti-riot gear evicted them from their hostels and classes before forcing them to lie down on the roadside where the beating happened. 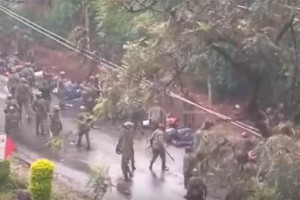