UHURU to sack Anne Waiguru and replace her with Dr. Sally Kosgei

Dr Sally Kosgei, who has a PhD in African Economic History from Stanford University in the US, worked as the Head of Civil Service during former President Daniel Moi’s regime and performed her job with zeal. 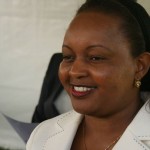 After Moi was ousted from power in 2002 by former President, Mwai Kibaki, Kosgei cried like a baby at State House because she knew that her days at the helm of Kenya’s civil service were over.

After she was thrown out of Government, Dr Sally Kosgei contested for the Aldai Parliamentary seat in 2007 on an ODM ticket and won by a landslide.

In 2013, she defended her seat only to beaten badly by Cornelly Serem who was gunning for it on a United Republic Party (URP) ticket.

After the ignominious defeat, Dr Sally Kosgei took a sabbatical leave until recently when President Uhuru Kenyatta contacted her and hinted to her about a Cabinet slot.