Tragedy! Another CORD politician found dead in a lodging

Former Prime Minister Raila Odinga’s Orange Democratic Movement (ODM) party has suffered yet another loss after they lost one of their own in unclear circumstances over the weekend.

Msongaleni MCA, John Kilonzo, was found dead in a lodging at Mtito Andei on Sunday under mysterious circumstances.

According to Kibwezi District Administration Police Commandant, Albert Hama, Kilonzo’s body was discovered at 5 pm in a room he had booked the previous night. 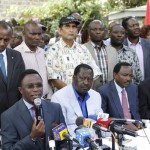 The lodging attendant, who had gone to prepare the room, found it locked from inside and raised an alarm. The police were called in and when the door was broken down, the body of the ODM politician was found.

It is not clear what exactly killed Mr. Kilonzo but police are not leaving anything to chance because he was a politician and anything is possible.

The hotel is also yet to confirm whether the deceased had a partner in his room at the time of his death.