Patrick Makau King’ola has spoken 164 times in Parliament since March 2013.

Patrick Makau was a banker at Standard Chartered bank until 1999 when he joined Mavoko Municipal Council as Athi River Councillor in 2002.

In July 2013, Patrick Makau retained his seat as MP for Mavoko Constituency after Justice Mutende declared she found the election to have been conducted in accordance with the law.

“I find the election to have been fairly and transparently conducted in accordance with the election laws. The verdict of the electoral body must be respected”, she said in during the ruling that took more than an hour. 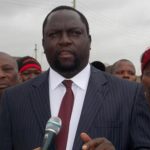 All petitioners, their lawyers or agents were not in court when the judgment was delivered. They had cited several election malpractices before and during election, among them vote buying, bribery and failure by their agents to sign forms 35.

In November 2015, Machakos County Governor Alfred Mutua asked the EACC to investigate the Mavoko MP claiming he was involved in an attempt to grab 13,000 acres of a company’s land.

“We are aware that interested groups involving senior government oﬃcials and brokers are involved in a plot to grab and sell off the land,” Mutua said.

“The land is not and has never been for sale. It is public property and there has been no plan to parcel or sell it,” he added.

In a letter, Mutua asked the commission to swiftly investigate the alleged attempt to grab the land saying it had no squatters but that people were placed on it to justify the grabbing.

“Anyone who has purchased parcels of the land should consider themselves to have been conned,” he said, and directed all occupants to leave. “If this matter is not handled expeditiously, we fear it may culminate in blood shed,” he said.

In April, 2016, Mavoko Mp Patrick Makau and Kathiani Robert Mbui described Wavinya Ndeti as an arrogant and a proud
woman who was not fit for any political position in Kenya.

“The Good book is very clear that a woman will ditch her tribe to adopt her husbands’, Wavinya would be respected by the Kamba community if she would vie at Nigeria where she is married. The funny thing is that even after she tied knots with a Nigerian citizen, she continued to stay in Kenya.” fumed Patrick Makau giving an example of former lands CS Charity Ngilu who shines at Kitui where she is married, despite being born at Mbooni.

Patrick Makau said Wavinya displayed a lot of arrogance and Machakos people would regret if they entrust her with any political position. He said Wavinya was going round his Mavoko Constituency telling people that projects she started were not completed almost four years since Makau took power.