Never insult UHURU and walk away! See what happened to KHALWALE on Saturday!

Kakamega Senator, Boni Khalwale, should be thanking his ‘gods’ by now after he escaped a dog’s beating in Mumias, Kakamega County, for allegedly betraying the community.

The ugly incident happened at a burial of former councillor Were Bombo and was never captured by mainstream media for reasons best know to them. 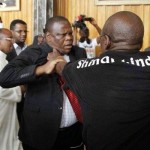 Irate residents, who were baying for Khalwale’s blood, alleged that the outspoken Senator was bribed with Sh 12.5 million by Nairobi Governor, Dr Evans Kidero, to buy his silence on woes facing Mumias Sugar Company.

ODM’s National Youth Chairman, Rashid Mohammed, who was among mourners asked Khalwale to explain himself after a bank slip with his details circulated on social media.

“Today you have an opportunity to clear the air,” Rashid said amid cheers from mourners.

But Khalwale, who looked like a chicken that had been rained on, mumbled a few words only to be forced out of the funeral by irate youths who even stole his phone.

After the burial, Khalwale said the banking slip that was circulated on social media is a forgery and this is the work of his political opponents who want to vie for the Kakamega Senate seat in 2017.

Khalwale and Machakos Senator, Johnstone Muthama, are among leaders who abuse President Uhuru Kenyatta whenever they like.