Julie Gichuru’s husband, Anthony Gichuru, was Cyprian Nyakundi’s person of interest. The twitter bigwig was on a mission to remove skeleton in the Gichurus’ closet. 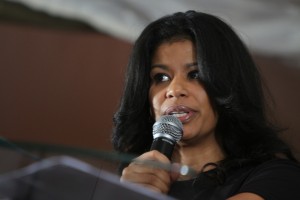 Nyakundi says Anthony’s greatest acquisition has been Julie Gichuru whom he claimed Anthony married for the sole purpose of cleaning up the image of the Gichuru empire, looted from Kenyan taxpayers.

Julie Gichuru’s father-in-law is wanted by British authorities for money laundering among other charges.

“Indeed, Julie Gichuru lost her job at Citizen TV after her sham 28th June 2015 TV-slot, where Kenyans protested on Twitter after her seemingly scripted interview with the Kidero, with users unanimously conceding that it was paid PR. Probably a kind favour in return for dirty deals being sent to Tony Gichuru’s way.” Wrote Nyakundi in part.

The blogger also touched on the issue of Julie’s hubby suing Robert Alai for linking him to Ruai land grabbing scandal.

The twitter bigwig also implicated Julie in Kenya House project during 2012 Olympics in London in which the country lost millions of shillings through dubious deals.