Franklin Mithika Linturi was born in 1969 in Igembe in Meru County. He is the Senator of Meru County having been elected on the 8th August, 2017 as the 2nd Senator of the County. Previously, he was the Member of Parliament for Igembe South in Meru County.

In 2013 he contested for the Igembe South Constituency seat on a TNA Party ticket (Jubilee Alliance).

Mithika contested for the Igembe South parliamentary seat on a Safina party in 1997. He was defeated by Jackson Itirithia Kalweo who vied on a KANU ticket. He later decamped to the defunct National Development Party of Kenya (NDP) before it merged with Kanu.

Mithika argues that he performed dismally in 1997 because his party was registered very late and lacked resources to support its candidates. 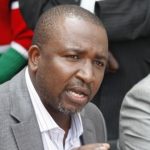 In 2002 Mithika Linturi also contested for the seat on a KANU ticket but was defeated by Raphael Muriungi who contested on a NARC party ticket.

In 2007 he contested and won the Igembe South Seat on a KANU ticket and joined the 10th Parliament.

Franklin Mithika Linturi has been a member of Departmental Committee on Energy, Communications and Information and also a Member of Public Investments Committee and House Business Committee since March 2013.

After High School he joined Kenya Institute of Marketing for his Diploma in Marketing. Late he pursued a Certificate Course in insurance at College of Insurance.

Franklin Mithika Linturi joined the insurance industry and worked as an agent for various firm before he founded Arkehoice Insurance Brokers Ltd in 1999 where he is the managing director. The firm is based in Meru town with branches in Nairobi and Maua town.

In April, 2013, There is a case of a woman who accused police of not arresting Igembe South MP Mithika Linturi for failing to pay monthly maintenance of Sh50,000. The woman claimed she has made many trips to Kileleshwa police station to ask that a warrant of arrest issued by a Nairobi court be effected. The woman, a dentist, went to court in August 2012 after the MP allegedly abandoned her and their three-year-old son.

She claimed that she was evicted from their Kilimani house and is living in Riruta. The court granted orders directing the MP to pay the woman Sh50,000 every month. She says that she was married to the lawmaker in May, 2008 under Meru customary law and she gave birth to a son on March 7, 2010.

The woman claims Linturi accepted responsibility for the child and provided for him “materially, morally and emotionally”. She says that all was well until August 2011 when Linturi became cruel, abusive, irresponsible and negligent towards her and the child. She claims that the MP had failed to maintain the child, has neglected him and stopped giving moral and emotional support.