The lawyer who is representing former KTN anchor, Louis Otieno, in a court case where he is alleged to have murdered his late girlfriend, Careen Chepchumba, confirmed that the once celebrated anchor is seriously ill and cannot appear in court in person.

Sometime back, Louis Otieno was rushed to The Mater Hospital and admitted in ICU after he collapsed in his house.

After his health improved, he was moved to the general ward before being discharged, having stayed in hospital for a month.

However, his health has deteriorated despite being flown in and out of the country for specialized medical attention.

Being the only son, Louis’ mother – Elizabeth Omollo who worked with KBC and Radio Ramogi – is said to have used everything at her disposal to restore her son’s health but things seem not to be working.

The former TV anchor lives with his mother because he cannot manage to do anything on his own from going to the toilet to washing his own body.

Word has it that he is confined to a wheelchair and is only surviving by the Lord’s mercy.

Louis was one of the highest paid TV anchors but he squandered all his money with women and alcohol.

He never invested his money wisely and once trouble befell him, he was reduced to a shadow of his former self.

Louis Otieno has been accused of coercing his late girlfriend Careen Chepchumba to borrow hefty amounts of money to fund his lifestyle.

Kili told the court that his daughter also bought Otieno a Range rover after trading in her VW car.

The court also heard that before she was killed, Careen Chepchumba sought restraining orders against Otieno for allegedly harassing and threatening her.

Kili, a director at County Pension Fund, told the court that trouble started when Otieno moved into their apartment as a tenant in 2011 and started an affair with the daughter.

He further said that at first Careen Chepchumba denied the relationship but later confirmed after a trap set by her family revealed that she had been with Otieno at his house until as late as 11pm.

The former TV anchor came out of his house on the said night when he heard his girlfriend being confronted by the father.

Kili also said that after that day Careen Chepchumba started stealing money from him, which was very strange since she never did so.

She later took Sh600,000 from her father’s briefcase and when confronted, Careen Chepchumba said that she had given Sh400,000 to Otieno for his medical expenses.

The court further heard that Careen Chepchumba had earlier on moved out of her parent’s house to her own apartment, even lying to the family that the house was in Amboseli yet not very far from their home.

Kili further said stated that after a few weeks, he got reports from different people that his daughter owed them money and Careen Chepchumba had used one excuse or another to borrow the cash. “She was deep in debt. The money was taken from family friends and people whom she had entered into business with but she never paid,” he said.

On February 6, 2012, a week before she was found dead, Careen Chepchumba wrote a letter and took it to her father’s office. In the letter, Careen Chepchumba said she was remorseful having thought about her actions and why she fell in love with a man so manipulative and took advantage of her innocence and trust.

Careen Chepchumba further said she had stolen, lied and was so deep in debt since Louis Otieno was extorting money from her and relying on her for financial upkeep.

Careen Chepchumba explains how she got into debt

On February 12, a Sunday when Kili gathered all the people who his daughter owed money in his house, the court heard that Careen Chepchumba confided in her father that she had indeed taken money from them and further said that she had made a mess of herself.

That’s when she revealed that she had bought a Ranger Rover KBQ 122S for Louis Otieno after paying cash and trading in her VW car. In the meeting, she agreed on a way she will be able to pay part of the money by having an amount deducted from her salary. Her father would promise to pay the rest for her.

“She tearfully asked her family for forgiveness and requested to be allowed back home since she couldn’t afford her apartment fees,” the father said.

“She further promised to go to the DCIO Kilimani the following morning to report the case of being extorted and harassed by Otieno who kept calling her on the night of the meeting,” Kili said.

“Her brother dropped her off at her apartment. That was the last time we saw Careen Chepchumba alive as she was found dead in her bed on Tuesday morning,” Kili said.

The family had tried to reach her in vain as she was not answering her calls before her lifeless body was found.
Kili said that when he saw his daughter lying dead on her bed, he suspected foul play and called in the police to investigate her death.

And true to his suspicion, the autopsy report showed that Careen Chepchumba had been strangled. Louis Otieno, whose lawyer says is indisposed since he was unwell, is expected to testify on the next hearing date if he presents himself. 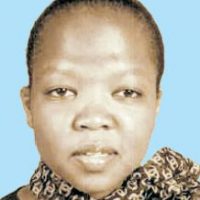