He was elected to the 11th Parliament on an Independent ticket. This means that he was not affiliated to any political party.

He is the youngest Member of the 11th Parliament having been elected at 26 years. 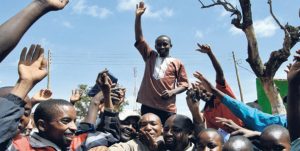 In the National Assembly Kinoti Gatobu is a member of the Catering and Health Club Committee.

Boniface Kinoti Gatobu has spoken 143 times in Parliament since March 2013.

Gatobu, who is also the chairman of Mount Kenya East Parliamentary group, an association bringing together MPs, Women Representatives and Senators from Meru, Embu and Tharaka Nithi counties.

After excelling in his KCPE in 2000 emerging the best in KCPE in Kibirichia location, Kinoti Gatobu joined Nkubu High School in 2001 until 2004 when he sat for his KCSE.

From 2006 he joined University of Nairobi Lower Kabete Campus for his Bachelor of Commerce course. He graduated in 2010.

Kinoti Gatobu enrolled for a diploma in writing with the Writers Bureau of London where he won Best Writers Award, 2010.

While waiting to join university, in 2005 Kinoti Gatobu worked as an untrained teacher at Kibirichia Secondary School.

He also taught at the Kabete Rehabilitation Home School for Under age prisoners as a volunteer teacher while still in the University of Nairobi, Lower Kabete Campus.

After graduating from University of Nairobi, Kinoti Gatobu went back to the village to continue teaching in Kibirichia Secondary School and two other schools in his village.

Kinoti Gatobu turned down big job from Companies like Mastermind, Safaricom, and KPMG not forgetting the huge salaries that accompanied the offer, to go toil in his community as a primary school teacher on charitable basis.

Kinoti Gatobu would wake up every day at the crack of dawn and head to teach in Mburugiti Primary School and then Kibirichia Secondary School in his Ntirimiti home. He also started distributing ‘high-end’ revision books to schools in the area.

He was also a prolific writer and by the time he graduated in 2010, he had been featured in publications of the Nairobi Stock Exchange, Marketing Africa, Institute of Management and Institute of Certified Public Accountants’ magazines. However, his big break came in 2010 when he scooped the Safaricom award for designing the best marketing plan for Safaricom Live.

In 2011 Kinoti Gatobu started Kibirichia Education Welfare where donated revision materials to schools in his location.

Later on he continued with his good work till his election as area MP. A book would cost Sh1,000, and Gatobu prevailed upon old boys and well-wishers to contribute and for eight years, he had reached 22 schools. He also helped establish two computer centres in primary schools.

“As an MP, I went ahead with the project of giving school books and computers through the Buuri Education Welfare and not through CDF but from personal contributions, well-wishers and corporate sponsors.” Kinoti Gatobu adds that the Welfare, also offers full scholarships to needy students.

Kinoti Gatobu recalls how his mother left him while only three months old under the care of her aunt when she joined Kigumo Teachers College. “The aunt had a shop at the market, and she would take me with her. I literary became the child of the community. I have to serve this community,” he says.

Kinoti Gatobu and his wife during a thanksgiving just before they got married donated their personal finances subuiga land and all that they could manage in building of Upendo children’s Home to cater for the most destitute children in Buuri.

During his wedding in 2014 at the proposed Upendo children’s Home, in his speech, Kinoti Gatobu donated all his wedding gifts to the children’s home, thanked President Uhuru Kenyatta for attending his big day in his first tour of Meru County.

Apart from his own initiative in equipping schools with learning materials, Kinoti has also gone ahead with roads construction.

When President Uhuru Kenyatta attended my wedding in June, I requested him to tarmac the Kisima- Kibirichia road, which goes past the Meru-Nanyuki road to Kiirua and Ruiri that is about 40km,” he says.

In May last year, the MP’s father died in a road accident at the Ntugi market on the Meru-Nanyuki road. The area with an inclination stretching close to 20km has had many fatal accidents, and Gatobu says the Kisima road would act as a diversion.

His efforts though are not constrained to roads alone.Last year, he sunk five water dams and began to drill boreholes.

Kinoti Gatobu, wedded his sweetheart Caroline Nkirote at a colourful ceremony in Buuri at the Upendo children’s Home grounds. Caroline Nkirote played an important role in his electoral victory. She resigned from her job to help him in his campaign trail. They had known each other for 9 years. 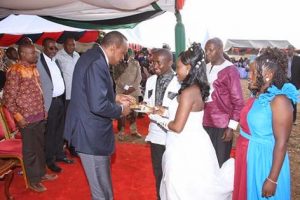 His grandfather was a squatter. His father, Moses Gatobu, a secondary school teacher, who went to a simple high school
(Miathene) in Meru. His father died in June 2013 in a road accident at the Ntugi market on the Meru-Nanyuki road. His mother, Agnes Kinya Gatobu, joined a Kagumo Teachers Training college after giving birth to Kinoti, leaving him in the care of his Aunt, Gladys Njiiru.