While addressing the Tanzanian Private Sector Association on Thursday, Magufuli, who everyone is talking about in the region and beyond due to his unconventional style of leadership, blasted Brookside accusing them of exploiting poor Tanzanians with their unfriendly business model. 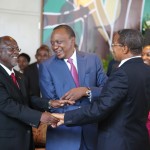 He wondered why Uhuru’s milk company was collecting milk from farmers in northern Tanzania at a throw away price, process it in Kenya and then sell it back to them at an exorbitant price.

The Tanzanian firebrand rooted for Tanzanian companies to process Tanzanian milk and sell it locally at reasonable prices rather than allow Uhuru and his Brookside Dairies to continue exploiting Tanzanians.

“How many dairy firms do we have that are operational? Do you remember Brookside Company in Arusha (Uhuru’s company)? It used to collect milk from Maasais from Northern Tanzania, take it to Kenya for processing, then bring it back to us to drink at a very high price… enough is enough,” said Magufuli.

Here is the video of Magulufi blasting Brookside>>>>