Omar Mwinyi Shimbwa was born on 1st August 1958 in the Coast province of Kenya. He is the Member of Parliament of Chanagmwe Constituency in Mombasa County elected on an ODM ticket.

He attended Kagumo Teachers’ College between 1977 and 1979 for his course in teaching career. 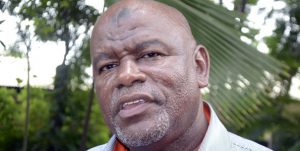 Changamwe MP Omar Shimbwa, served as national chairman of the Islamic Party of Kenya (IPK) in 1991 before it merged with Ford-Kenya.

Omar Shimbwa has been Coalition Member of ODM and CORD 2012.

On 28th March, 2013, Omar Shimbwa was sworn in as the Member of National Assembly of Kenya representing Changamwe Constituency in Mombasa County. Has been a member of Departmental Committee on Public Works, Roads & Transport of the National Assembly since 2013.

Omar has shares in Royal Circle Agencies Premium Properties, a real Estate company based in Mombasa.

He also has shares in Ruman Ltd. This is a Ship Contracting and a clearing and forwarding company. It is situated along Mudhari Road, off Moi Avenue, Mombasa.  The company is comprised of three strong directors namely Mr. Mansoor Ahmed a feller of Institute of chartered shipbrokers (MICS), Mr. Mwinyi Ali a Bachelor of Commerce holder and Mr. Omar Shimbwa an Educationist.