18 TNA MPs have given Devolution Cabinet Secretary, Miss Anne Waiguru, 48 hours to resign from her office or be forcefully evicted like a dog if she fails to do so.
The MPs who issued a joint statement on Thursday also asked President Uhuru Kenyatta to sack her if she doesn’t resign. 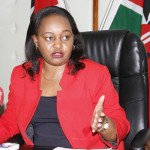 The MPs who are some of the President’s closest confidantes said all appointees to the Executive are not indispensable.

“A CS in charge of Devolution cannot stay in office amidst ongoing shocking revelations of graft under her watch. She owes it to Kenyans to step aside,” the joint statement read

The TNA leaders said they are “conscious of the constitutional demands” that State officers must demonstrate respect for the people they serve and bring honour to the country.

The 18 MPs who endorsed Waiguru’s sacking are: