Over the last one week, CORD principals, Moses Wetangula and Kalonzo Musyoka have been threatening Raila with ditching CORD over last Saturday’s chaos in Kakamega County during the launch of Wetangula’s Presidential bid.

But in a tough warning on Wednesday, Namwamba, who was speaking from his rural home in Budalangi, said he will not allow CORD leaders to hold Raila Odinga hostage by threats and try to intimidate him.

Namwamba urged Kalonzo and Wetangula to ditch CORD if they so wish because the coalition is not a prison where they are being confined. 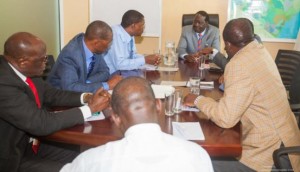 “Whoever wants to leave CORD should do so, CORD is not handcuffs or a maximum security prison. Leave if you so wish!” Namwamba said.

Namwamba is a close confidante of Raila Odinga and when he is making such remarks, it means he must a have blessings from his boss.