Mwalimu Masoud Mwahima is the MP for Likoni Constituency in Mombasa County. He has been the MP from 2008. He was elected through the ODM ticket.

Mwalimu Masoud sat for his Kenya Secondary Certificate of Education – KCSE in the year 2000. He managed to score a D- (Minus). At that time he was a mayor of Mombasa City and a Councillor of Shika Adabu Ward.

Initially he was the Deputy Mayor of City Council of Mombasa and finally in the year 1999 he became a mayor until 2002.

He has been the Likoni Chairman of Kenya African National Union in 1997.

In 2007 Mwalimu Masoud was elected to parliament on an ODM ticket to represent the people of Likoni Constituency.

From 2008 to 2013 he was Member of Local Authorities Committee and also a Member of Catering and Health Club Committee in Parliament. 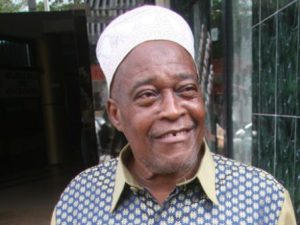 in January 2016 Mwalimu Masoud said he has ditched his party ODM and announced that he was moving to the Jubilee Party. He claimed that ODM was plotting to deny him the party ticket in next year’s election. “I want to announce that next year, I will defend the Likoni parliamentary seat on a JAP ticket and I am telling my opponents, whoever they will be, that I will win early in the morning,” he said.

In 2016 there were rumous that he had been given a big brown envelope full of cash by President Uhuru Kenyatta at Statehouse Mombasa. He said the envelope he walked out with contained the certificates of his supporters who he was assisting to get jobs.

There is a bad blood between Mwalimu Mwahima and Governor Ali Hassan Joho. Mwalimu Masoud said the governor has shortchanged Likoni constituency in terms of positions at the county government including nominations for MCAs. Coastal MPs tried to mediate the duo but it all hit a snag.

Likoni MP Masoud Mwahima Starts Sh30 Million Stadium Plan in 2014 but much progress is yet to be seen.

Mwalimu Masoud lives with his family of one wife and nine Children at Vyemani home in Likoni, Mombasa County.

He is a dairy farmer in Likoni Mombasa plus his parliamentary salary in the National Assembly.