Lucy Kibaki Full name is Lucy Muthoni Kibaki. She was born in 1940 in Mukurwe-ini in Nyeri County. She died on 26th April 2016 at Bupa Cromwell Hospital in London after brief hospitalization at the Nairobi Hospital.

She was the wife of former Kenyan President Mwai Kibaki and was former First Lady of Kenya from 2002 to 2013.

A statement by President Uhuru Kenyatta stated “Her excellency has been unwell for the last one month and has been receiving treatment here in Kenya and subsequently in the United Kingdom.” Mrs Kibaki was admitted to Nairobi Hospital in March, 2016 after seeking treatment at Gertrude’s Hospital in Muthaiga.

Mrs. Kibaki was a patron of the Kenya Girl Guides Association.

Lucy Muthoni Kibaki was known for supporting disadvantaged and disabled people. She chaired the Organization of the 40 African First Ladies Against HIV/Aids. 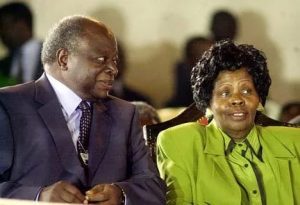 She was the daughter of the late Rev. John Kagai and Rose Nyachomba, in the Mount Kenya.

Lucy Muthoni Kibaki went to the Alliance Girls High School then trained as a teacher, and rose up to the post of principal. She was a teacher at Kamwenja Teachers College before she was transferred to Kambui College.

Lucy Muthoni met Mwai Kibaki in 1960. After a two-year romance, the couple married in 1962 during the clamour for Kenya’s independence.