The KWS has announced that a loose lion has been spotted in Karen Hardy area along Maasai Lane. The residents, Passers-by and motorists have been asked to exercise caution as they go about their business around that area.

The KWS rangers have been dispatched to locate and secure the lion. They have promised to capture it in one piece.

On March 31, a lion believed to have wandered from Nairobi National Park was shot and killed after it attacked a man on the Isinya-Kiserian road.

Mohawk was felled by nine bullets fired by Kenya Wildlife Service rangers, resulting in outrage by the public and an online petition by conservationists.

In an incident before that, a lion named Cheru strayed out of the park and was spotted by motorists near Kaysalt area along Mombasa Road.

Very recently another lion was found dead in Kitengela after an earlier report that it was roaming alive. It was suspected that it was killed by Maasai morans. 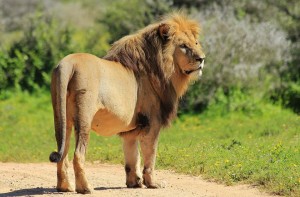