Kenya will burn if I lose my seat! WETANGULA says

Ford Kenya party leader, Moses Wetangula, who is on the verge of losing his senatorial seat over voter bribery charges, has warned of irreparable consequences if the Independent Electoral and Boundaries Commission deletes his name from the voters’ register. 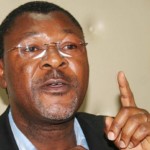 Speaking in a rally organized by CORD in Kitale to pray for him, Wetangula said Kenya will burn if the IEBC tries to obliterate his name from the register.

In case the IEBC delete his name from the voters’ register, the outspoken Senator will automatically lose his Senate seat.

Wetangula also said that he will not be cowed by the voter de-registration strategy.

He claimed that this was a move made by the Government in a bid to force him to tone down on his oversight role against a Government that he accuses of massive graft.

“My problems started when I threatened to move an impeachment motion against President Uhuru Kenyatta over graft and incompetence,” said Wetangula.

On his part, Kakamega Senator, Boni Khalwale, accused some Luhya leaders of being behind the woes facing Wetangula.