President Uhuru Kenyatta left the country on Thursday for the United States amid confusion among Kenyans after information from Washington indicted earlier that he had cancelled his trip.

The President is scheduled to attend the 70th session of the UN General Assembly (UNGA), among other State duties, including meeting Pope Francis and US President Barrack Obama. 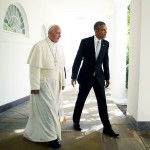 Uhuru left the country even after the Kenyan Embassy in Washington DC announced that the President had cancelled his trip due to unavoidable circumstances.

But what made Uhuru change his mind?

According to an impeccable source, the White House contacted the Government with a desire to meet Uhuru over regional issues and this may have made the President change his mind.

Obama’s administration called the Government on Wednesday evening and asked the Head of State to attend the UN General Assembly in order to brief Obama on the Somali, South Sudan and Burundi situation.

The Pope, who will address the UN General Assembly today, also expressed his desire to meet President Uhuru Kenyatta in his hotel in New York to discuss his expected visit to Kenya in November.

The Catholic pontiff wants to officially brief Uhuru about his trip to the country in November.