Reality dawned on former Prime Minister, Raila Odinga, in Homa Bay yesterday after he came face-to-face with the reality of voter apathy when he visited some of the IEBC voter registration centres.

The former PM almost collapsed when he found IEBC clerks idle with no one to register as a voter in his own stronghold.

And to make matters worse, the clerks told him that the trend had been the same since the exercise kicked off revealing that they only serve a paltry 10 to 20 people in some Wards. 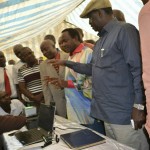 Raila was also surprised to learn that Siaya County had registered only 8, 902 new voters, Homa Bay 5, 562 while Kisumu had a paltry 7, 314 by close of business on Thursday as some Counties in Central Kenya register hundreds of thousands of votes.

The news almost gave the former PM a ‘heart attack’ because this may see him not making it to State House in 2017 if something drastic is not done urgently to change the situation.

He changed his itinerary and begun impromptu rallies to force his supporters to go and register as well as ordered all CORD MPs to abscond Parliament and lead in the voter registration exercise.